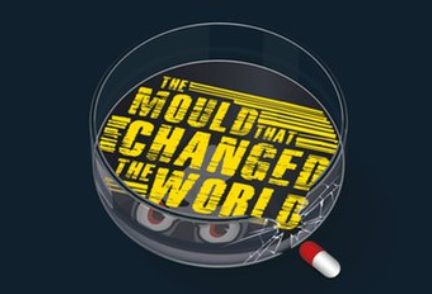 The Mould that Changed the World

Inspiring celebration of penicillin but a stark warning for the future

The Edinburgh Festival Fringe is well known for tackling topical issues of the day and the growing resistance of germs to antibiotics is fast becoming one of the most critical 21st century issues. Robin Hiley’s new musical, The Mould that Changed the World, charts the story of penicillin’s discovery and seeks to raise awareness of the potentially diabolical consequences of increasing germ resistance. This production, performed by Hiley’s own company Charades Musicals, has been funded by BSAC ( the British society of Antimicrobial Chemotherapy), with a cast including both professionals and locally based scientists and medics

The first scene, set in the trenches of the First World War, exemplifies life pre-penicillin, with the cast portraying soldiers on the battlefield and nurses tending the dying.  Germs are personified by two lithe, leotard-clad dancers, who infiltrate the the stage, representing the insidious spread of disease. A large clock on the wall is a good theatrical device that moves the timeline forward to 1928 and the London lab of Scottish biologist Alexander Fleming. His accidental discovery of penicillin is quite a fleeting scene, despite its importance to the narrative. Fast-forward ten years and the mould has now been refined into a drug suitable for human testing. Thus follows one of the most powerful moments of the production, when a seemingly innocuous injury quickly turns into near-fatal septicaemia. Yet with one injection, the patient rises, Lazarus-style from his bed and the leotard germ dancers fall to the ground in writhing defeat.  A beautifully sung solo from Sarah Haddath celebrates this achievement. However, antibiotic overuse in subsequent years results in increasing germ resistance and in the final chorus the cast – all brandishing petrie dishes) – warn of an apocalyptic future in which common ailments are untreatable and once more life–threatening.

What particularly stands out in this production is the impressive chorus who provide strong harmonic singing and dynamic contrast throughout, whilst being well supported by the hardworking orchestra. The stage placing of the ensemble could at times be more imaginative, but there is limited space for this fairly large company. Their musicality and obvious enthusiasm helps to carry and elevate this quirky subject matter, producing an enjoyable and thought-provoking spectacle. A planned post-fringe roll out to schools nationwide has the blessing of the country’s Chief Medical Officer and should serve as a creative, and hopefully effective public health message. The Mould that Changed the World is certainly prescribed viewing for all.