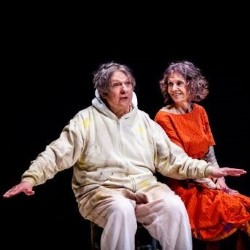 The Not So Ugly Duckling

A touching, inclusive celebration of our own dear selves

You’ll likely have at least a vague recollection of the at least the bones of Hans Christian Andersen’s Ugly Duckling story. A happy brood of ducklings with one misfit. The misfit is bullied sufficiently that he takes himself off, makes a few failed attempts to find a home, and eventually realises he’s not a misfit at all.

Jo Clifford and Maria MacDonell transport the story from a Danish lake to the Water of Leith and give us The Not So Ugly Duckling: A Play for Grown-ups. Following an unpleasant insemination (and a fascinating deviation into duck sex), MacDonell becomes a beautifully avian Mother Duck, painstakingly delivering eleven eggs, one of which is MUCH larger than the rest. After a brief cameo as a somewhat vicious (patriarchal) seagull, Clifford is our ugly duckling, disconsolate, disappointed and misunderstood. Expecting rejection, the duckling bounces from pillar to post, becoming more and more dejected. The long frozen winter feels like the final straw.

This is a gentle, considered production from director Ian Cameron. It’s nicely choreographed, with a set (Ali Maclaurin) which is used sparingly but imaginatively to help the story along. Maclaurin’s costumes are just fairytale enough, with a touch of urban grunge that doffs a cap to Leith. And lovely lights from Roddy Simpson accentuate the duckling’s isolation and chill loneliness, and then her hope for the future.

The story’s touching reveal is beautifully dealt with by Clifford and MacDonell and allows for a musing about whether it takes us all some time to work out who we really are. You’d expect nothing less from the author of the glorious Gospel According to Jesus Christ, Queen of Heaven. For here is the real message from Jo Clifford’s beautifully big heart: however different we may feel, however misunderstood, there is joy in difference, in being an individual, in being (in Clifford’s words) your own dear self. We’re all swans. And there’s no finer message than that.