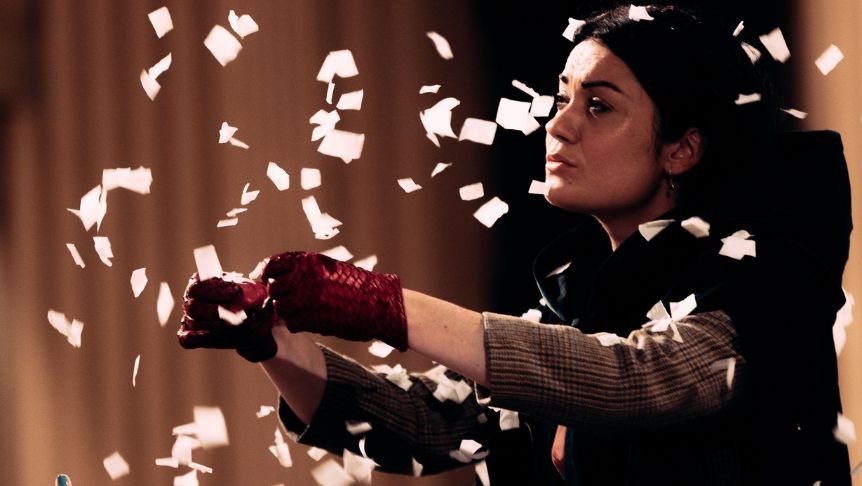 The Strange Undoing of Prudencia Hart

Rambunctious romp in a stunning setting

The cast make brilliant use of the space, weaving in amongst the audience at their cabaret-style tables, leaping atop counters, tables, even each other's shoulders

Whether you caught The Strange Undoing of Prudencia Hart the first time around or whether you’re entirely new to it, this production is an unmitigated treat. This year’s Fringe sees the Royal Lyceum Theatre revive David Grieg‘s wonderful script in Edinburgh University’s beautiful Playfair Library. Originally produced by the National Theatre of Scotland in 2011 and revived in 2018, this is a script that doesn’t date. Based on Scottish folk music and the wild and mysterious tales captured in centuries old ballads, the story tells us of uptight Prudencia, an academic who spends her days studying the ancient ballads and finds fulfilment in cataloguing things. One wintry day, she attends a conference in the Borders to share her expertise, gets snowed in at Kelso, winds up at a folk music night at a local pub, and all sorts of revelry unfolds.

There are all sorts of things to both love and admire in this show. Greig’s script is something special – chunks of it are written in rhyming couplets and the prose has its tongue firmly in its cheek. You’d expect nothing less than inventive and superb direction from Wils Wilson and movement from Janice Parker but the cast make brilliant use of the space, weaving in amongst the audience at their cabaret-style tables, leaping atop counters, tables, even each other’s shoulders, as well as using a more traditional stage space at the front of the room. Music forms a more or less constant sound bed and there are ballads and songs aplenty throughout the two-and-a-half hour show (there’s a fifteen minute interval and a bar). And the whole endeavour does an awesome job of grabbing each and every audience member by the lapels and swinging them into this riotous romp of a show with a whoop and a holler and a joyous abandon.

Charlene Boyd is perfectly reserved at the outset and becomes a suitably wanton Prudencia by the time the country air (and karaoke) has worked its magic on her. Ewan Black is a condescendingly cloying but ultimately dashing Colin Syme. Gavin Jon Wright brings a world-weary pathos to his performance that almost makes you sorry for him. And the remaining ensemble (Natali McCleary, Alasdair Macrae) sing, play various instruments and become the myriad of bit parts that make the story shimmer with flamboyant panache.

Seek out this rambunctious romp in a stunning setting while you can. Once seen, you can’t get it out of your head.