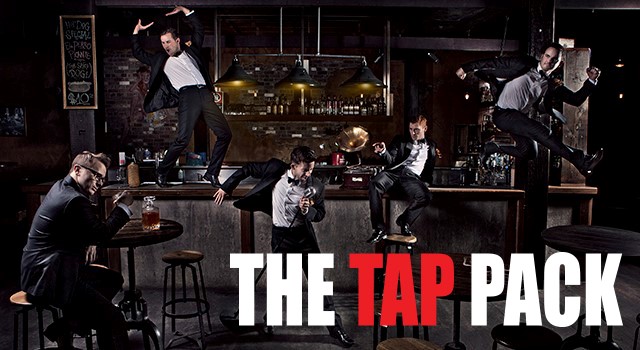 Toe tapping talent who dance with a precision not always seen in Fringe dance acts.

A self-styled tribute to the 1960's Rat Pack

The Tap Pack are a self-styled tribute to the 1960s Rat Pack, mixing old and new songs with their incredible toe-tapping talents. The show opens with Jesse Rasmussen, one of the pack’s three creative directors, playing the cajon box drum in a bid to entice audience members to put some money in his hat. Rasmussen interacts humourously with the audience setting up nicely for a show which flies by, it is so much fun.

Each of the five stars of the show—Rasmussen, Thomas J. Egan, Max Patterson, Sean Mulligan and Thomas Lacey—take on a unique character with unique talents, but what they all have in common is the ability to dance. They dance on tables, they dance on stairs, they dance with canes and they dance with a precision and aplomb not always seen in Edinburgh Fringe dance acts.

There is much encouragement for the audience to clap along and cheer and enough comedy to keep even the most ardent non-dance fan entertained throughout. But it is a dance show and particular mention should go to Egan, another cast member-cum-creative director, who completes a stunning solo near the end of the show, leaving no doubts in the audience’s mind about why he was chosen for the role.

This is an ensemble piece, however, and it almost seems unfair to pick out just one in a group so clearly all masters of their art form. The pace is fast, the music catchy and the bar in the background provides an opportunity for continuous movement on stage which enhances the Rat Pack feel of the performance.

There were one or two elements which need polish, not least the sound quality at times, but it is early in the run and when these small glitches are ironed out The Tap Pack will be a force to be reckoned with at the Edinburgh Fringe as prime time shows compete for audiences.