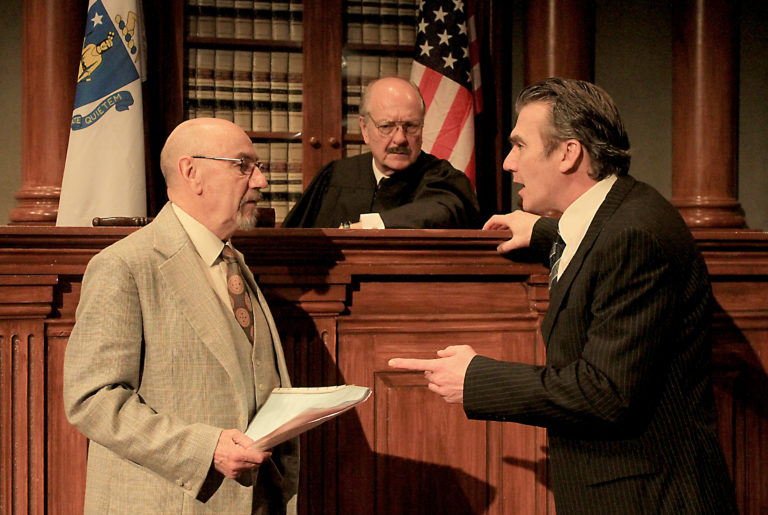 Middle Ground Theatre Company present an incredible rendition of Barry Reed's novel that is both memorable and utterly enthralling, in part thanks to the strength of its cast.

Exceptional, Your Honour. I rest my case.

The audience for Middle Ground Theatre Company’s The Verdict shuffle into Eden Court’s Empire Theatre amid hushed chatter: The curtain remains up while minimal traffic sound effects play as something stirs beneath the desk on stage. It is an odd juxtaposition – a man who has just woken on the floor of his run-down law office strips to his vest, performs a perfunctory morning routine (which includes several swigs of alcohol), before reassembling his suit and greasing back his hair. Before long, the first client visits. The audience barely notice the shift as the house lights fade slowly, a seamless blend from preamble into the first dialogue. It is an unconventional way to open a play, make no mistake, but it is a memorable directorial choice from Michael Lunney. Based on the novel by Barry Reed and adapted by Margaret May Hobbs, The Verdict tells the story of a troubled lawyer with a final chance to redeem himself by ensuring justice is done.

The central character is the flawed but principled attorney Frank Galvin, played with impressive panache by Ian Kelsey. Not only does Kelsey sustain a more than passable American East Coast accent, but he delivers Margaret May Hobbs’ uncommonly dialogue-heavy script with an understated confidence that is truly impressive.

The acting is strong throughout, with particularly memorable performances from Denis Lill as the lawyer’s ailing mentor and from Paul Opacic as the arrogant and manipulative doctor whose bragging intonation and peacock-strutting evokes the Commedia dell’Arte Capitano.

Considering the serious subject matter of medical malpractice, the twists and turns of the thriller genre and its considerable tension, there is a surprising amount of humour in the play. This is partly due to the lovable quirkiness of ‘Team Galvin’, Frank’s allies: his old Jewish mentor and his faithful Irish bar-tender. Much of the humour also borders on satire, directed at the legal and medical power hierarchy as well as the Catholic Church.

Boston in the 1980s is evoked in a range of subtle ways: the vintage telephone, the cut of the suits, and the strong Irish heritage – an identity Galvin clings to in his estrangement from his own wife and children. The Irish connection is also echoed in the sparse but beautiful music which plays during the many scene changes: Irish fiddle, folk songs and occasionally, retro fifties’ songs to introduce the bar scenes.

The stage design’s versatility is remarkable, but it is during the courtroom scenes that the full cast of fifteen comes into its own, with the varied use of levels to subtly indicate status. As soon as the second half opens, the director dispenses with the fourth wall and the audience are addressed directly as the Jury. The play is at its best here, especially during the the wordless interactions of the two legal teams as they react to each fresh revelation.

The Verdict dances on its challenge to sustain such a wordy script and retain audience interest throughout. Exceptional, Your Honour. I rest my case.