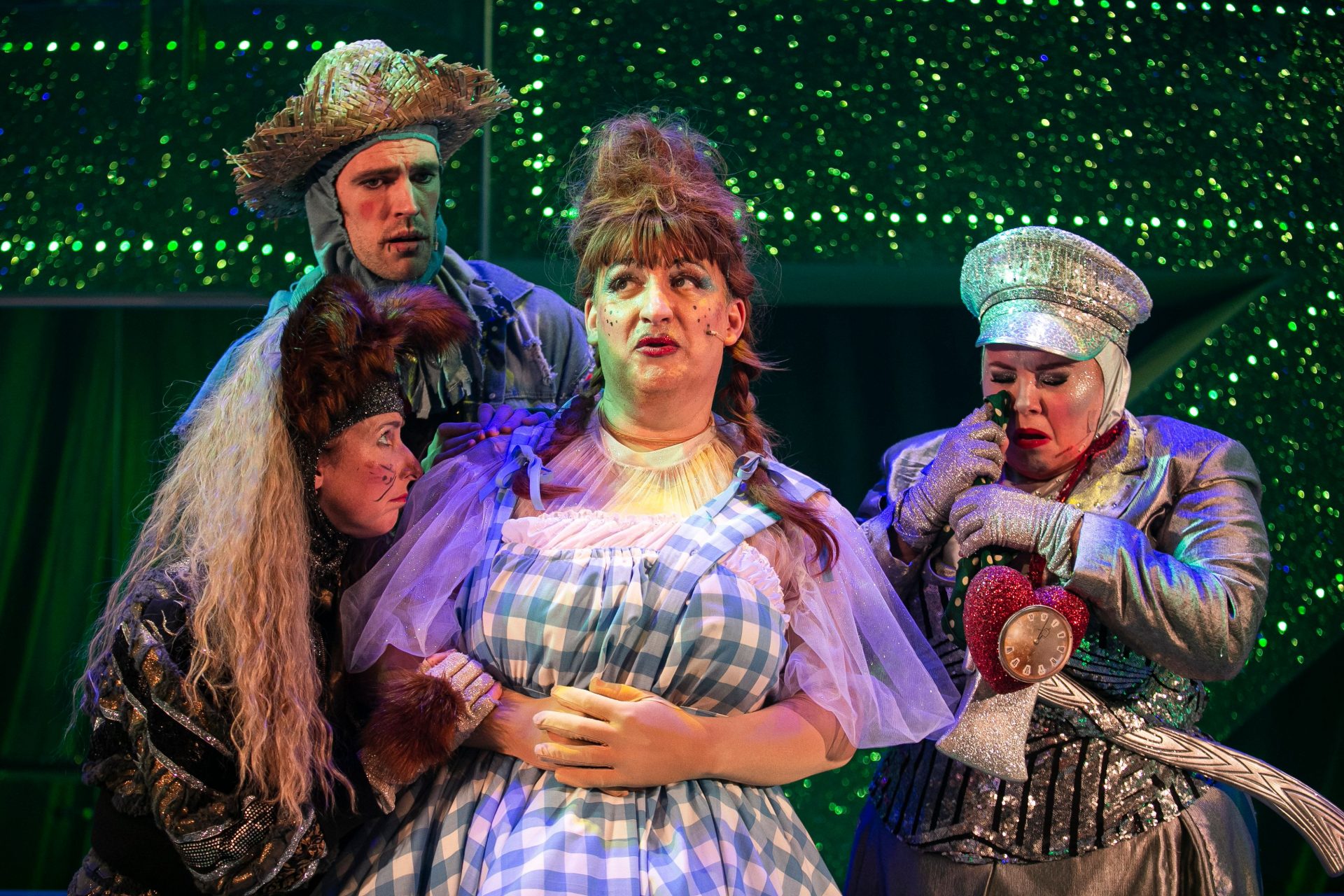 The Wonderful Wizard Of Oz

Chookies, we are back home at the Tron panto – this time for The Wonderful Wizard of Oz – and despite the pun-less title and no mention of the ‘Panto-sphere’ we are back in the Christmas world of Johnny McKnight. The closest they get to the film version is Dorothy Blawna-Gale (played by McKnight, the puns are still in the names) being interrupted when she is about to sing “Somewhere Over the Rainbow” and a joke about not being able to afford to sing “We’re Off to See the Wizard”.

There is nothing to worry about though; small children won’t be disappointed, for this version has enough thrills and laughs to keep them happy. The cast also know exactly how to deliver a line silly enough to appeal to a child, while the more risqué or topical content goes over their heads and lands with the adults.

And there’s plenty for adults to be interested in. McKnight is one of the greatest traditional panto dames on the stage, expertly handling all the outsize costumes, bits of business, and audience participation associated with the form. The thing that sets his shows apart is that he combines it with nods to LGBTQ+ drag and club culture – Brunchkin Land has Rainbow flags while the Flying Monkeys have leather jackets and handlebar moustaches like something out of Tom of Finland (without the raunch).

He also embraces and gently mocks Glasgow clichés. His dames are warm and maternal – respectable Maws – and despite their vanity, greed, battles against the ageing process, unrequited loves, and thwarted ambitions, none of these is ever a match for their love for their weans. There is a nice line in one of the songs about the streets being paved with pizza boxes, and the end of Dorothy’s trip to Oz finds her unable to get a taxi.

This underpinning of satirical realism also lets the audience feel part of the company by making meta in-jokes about being actors in a panto. One of the biggest laughs comes when Dorothy hopes the Lion (played by Julie Wilson Nimmo) gets a part in the reboot of Balamory (she played Miss Hoolie in the original). There are a few barbs aimed at rival pantos and a fabulous bit of ‘contemporary dance’ to make up for the lack of a storm budget.

Some of the characters are too thin, no matter how charming or charismatic a performer is (and all of them are). There is not much they can do if they are only there to make a plot point or fill time while a bit of set is wheeled on behind the curtain. Speaking of which, the sets and costumes are exuberantly festive, with highlights being the sugar pink ‘toilet holder’ dress worn by Glinda (Nimmo) and the exceptionally green Emerald City.

The main technical issue is the sound. Many of the song lyrics cannot be heard over the music, though the energy and the dancing keep it engaging. Tyler Collins is particularly mesmerising with his lanky mix of ungainly and dainty moves, but it’s a shame that we only get an inkling of the words. Similarly, whether the issue is diction, acoustics, or the microphones, almost everything said by the Lion (Nimmo) and the Witch (Katie Barnett) resembles bat squeaks (funny bat squeaks, but the jokes might be funnier).

Aside from wishing the wicked witch would throw us ear trumpets instead of (almost) throwing sweets, it is still a hugely enjoyable, big hearted, glitterball of gaiety.