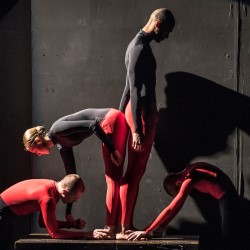 Intriguing look at gender through choreography

Many of the figures in Greek mythology are remarkable, but Tiresias – a blind seer and a man who was transformed into a woman for seven years – has historically been an important figure for artists and writers considering the issue of gender, from Virginia Woolf to Angela Carter. In this new dance piece by Julie Cunningham & Company, poems by Kate Tempest about Tiresias’s experience form the soundtrack to new minimalist choreography.

Tempest’s poetry is taken from her collection Hold Your Own, and is startling in its rawness, her voice vibrating with emotion. Although the reading is recorded, it contains all the energy of the live performances that made her name. Hearing her poems echoing across the Dance Base space is a treat, both for those familiar with and for those new to her work. The mythological subject is livened with contemporary references, which – unlike in the work of so many other poets – don’t feel perfunctory, but relevant and unpretentious. The directness of her prose demands attention, and while gender recurs as a theme, the poems sprawl out to take in myriad other topics.

Cunningham’s choreography is noticeably sparse and bare compared to Tempest’s overflowing words, though there are similarities in way she creates an ebbing and flowing of intensity. Having spent fifteen years as an acclaimed dancer, this is her first work as a choreographer after her company was launched earlier this year. She performs along with three other dancers, all demonstrating extreme concentration and skill. Moving across the stage, they contort themselves in ways that appear effortless. However, Cunningham’s choreography remains tight and focussed, often using sequences where only one or two of the dancers attract attention. In keeping with the focus on gender ambiguity, Cunningham avoids the use of gendered moves or clothes, dressing her dancers in red and black outfits that mirror each other.

As Tempest’s words increase in speed, Cunningham uses repeated sequences where a pair of dancers appears to intimidate or confront another. It’s rhythmic and repetitive in a rather captivating way, but the movement seems somewhat overpowered by the poetry, the level of intensity in Tempest’s words not quite matched by the choreography displayed.