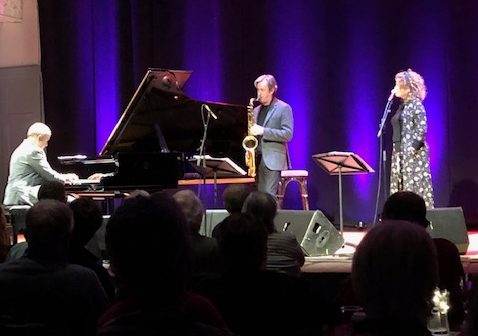 Tommy Smith is a Scottish jazz legend; indeed, an institution of the Scottish music scene. He began his musical life in the council estate of Wester Hailes in Edinburgh, taking up the saxophone aged 12, encouraged by his jazz drummer stepfather. In the 40 years since, he has become an international star, leads the Scottish National Jazz Orchestra and the Tommy Smith Youth Jazz Orchestra and is a professor at the Conservatoire in Glasgow. He is also known for blending and arranging jazz with different kinds of music, notably classical music.

However, tonight he arranges a jazz concert at the Queen’s Hall (to celebrate its 40 years as a music venue) which attempts to blend jazz and Scottish music together. The concert begins with a very young looking Smith (he is 52!) introducing himself – “my name is Mr Smith” – and then introducing the first half group, the Fergus McCreadie Trio. “I know all these young musicians,” says Smith. “I have been teaching them all at the Conservatoire!” McCreadie is only 20 and still a Conservatoire student, but he is already well launched on his jazz career and has just released his first record Turas. He is twice the winner of the Young Scottish Jazz Musician of the Year and has played with the Fife Youth Jazz Orchestra and the National Youth Jazz Orchestra of Scotland. Tonight he is accompanied by two other Conservatoire students, David Bowden on Bass and Stephen Henderson on drums.

McCreadie is as keen on Scottish folk music as jazz, and on Turas he has attempted to integrate the sound of Scottish music into the jazz genre. Tonight, he gives a very good account of this music, with a couple of tracks from the album and a couple of others. He is a skilled and fluent pianist, playing an intricate form of cool jazz but with reference to Scottish themes. He is well backed up by Bowden on the bass, who also gives some very good solos, and Henderson on percussion blends in beautifully, not attempting to dominate with his solos. Indeed, the trio really do hang together as a trio. A good opening first half.

After the interval, we first get duos between Tommy Smith on his tenor sax and Brian Kellock on piano. Kellock has established himself as the leading jazz pianist in Scotland and in the past few years, he and Smith have formed a very successful partnership. Tonight, we hear the fruits of that experience, with the lovely laconic style of Tommy Smith’s sax blending into the thoughtful melodic accompaniment of the piano. And yes, there are traces of Scottish music too. However, the Scots, or rather, Gaelic contribution, is made explicit when Kathleen MacInnes, the well known Gaelic singer joins in. MacInnes comes from South Uist in the Outer Hebrides and although now based in Glasgow, she remains a strong supporter of the Gaelic musical tradition and the language. As one critic remarked, “she has the voice of peat smoke and good whisky.” At this concert, she sings half a dozen songs, expertly backed by Smith and Kellock. It is a delightful performance. They get a warm reception from the 150 strong audience sitting around the Queen’s Hall cabaret tables, and we are rewarded with an encore. So, is there a distinctive Scottish jazz style? Well, it may be too early to tell, but certainly this is a good attempt which deserves further exploration.