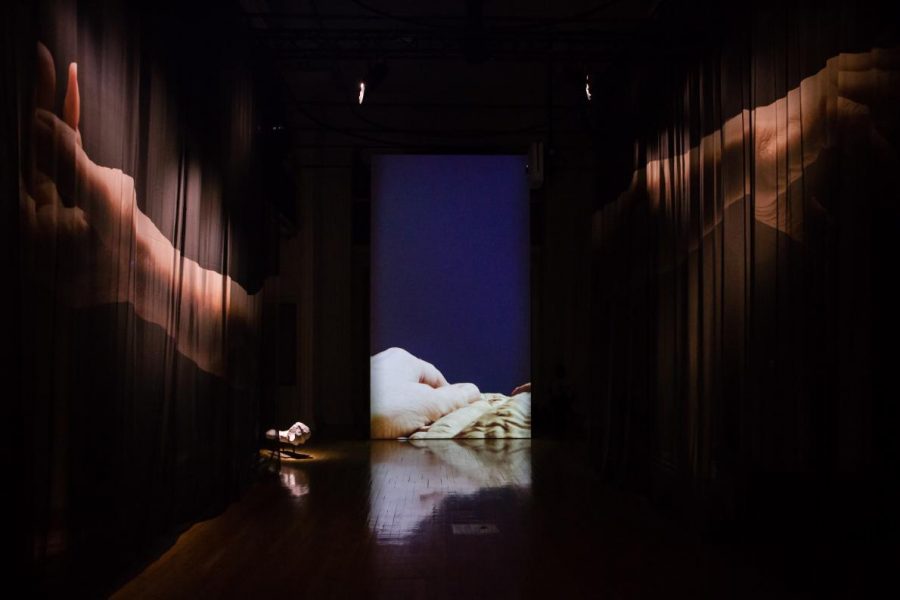 Tremble, Tremble and At the Gates

Captivating exhibitions exploring women's oppression, activism and empowerment are not for the faint of heart

“Did I disturb ye good people? I hopes I disturbed ye…” The giant witch looming over viewers in the Georgian interior of Talbot Rice Gallery is roundly successful in her aim. This experience of ‘expanded cinema’, as it is dubbed by creator Jesse Jones, is gloriously unsettling – both on a visceral level and an abstract one. Political disruption and the upsetting of the status quo in order to enable radical change, is what this exhibition aims to advocate. Inspired by Ireland’s recent campaign to overturn the Eighth Amendment, thereby granting women greater reproductive rights, Tremble, Tremble combines the anatomical and ideological to present women’s bodies as the battleground between exploitation and subjugation versus agency, resistance and self-determination.

Projected on two screens at opposite ends of the gallery, the witch protagonist, portrayed by actor Olwen Fouéré, dances and chants while growing larger and larger over the course of the performance, which runs on a thirty minute loop throughout the gallery’s opening hours. She quotes both from the testimony of Temperance Lloyd, a woman burned at the stake in Devon in 1682, and from the 1487 text Malleus Maleficarum, Heinrich Kramer’s treatise on the identification and extermination of witches. As another performer opens and closes curtains bearing pictures of arms and hands in various formations across the heart of the gallery space; viewers feel, in turns, enclosed in a maternal embrace, or shut out from the body of the exhibition.

The grim reality of the witch trials being referenced is brought home by the inclusion of two historical artefacts – an Irish declaration repealing the Witchcraft Act of 1586 and a replica of a scold’s bridle, a medieval torture device that was used to humiliate and literally silence women deemed transgressive or disobedient.

The idea of reclaiming the witch as a symbol of women’s empowerment continues to be a potent and powerful feature of the feminist zeitgeist, as evidenced by the popularity of Kristin J. Sollee’s Witches, Sluts and Feminists and by articles such as Lesley Riddoch’s recent piece in the Scotsman relating the #MeToo movement to Scotland’s bloody history of witch trials. Here, Jesse Jones draws on this notion to spectacular effect. It also feels pertinent that the artist has stated that some of her ideas for Tremble, Tremble came to her in dreams, or via tarot readings, as this is a nod to the historical links between 19th century spiritualism and the rise of the women’s suffrage movement, and further evidence of the complexity, subtlety and intelligence of the work.

The companion exhibition, At the Gates, is situated in the White gallery and is similarly concerned with women’s political activism and recent moves to address gender violence and political repression. The Artists’ Campaign to Repeal the Eighth Amendment (2017/18) consists of a collection of banners from various marches and demonstrations on the run up to the referendum on the abortion law in Ireland. Many of them subvert religious iconography to present new, empowering narratives in line with the aims of the campaign. In Dragonslayer (2017), the biblical character, David, is represented as a modern woman slaying the dragon of oppression.

Olivia Plender‘s sound installation Learning to Speak Sense (2015) explores the experience of being voiceless, and counters the patriarchal linearity of language by returning to sounds and verbal impulses that exist beneath the semiotics of linguistic texts. In Urania (2015) and To Our Friends (2015), Plender draws inspiration from an early 20th century feminist journal to explore perspectives and ideas that transcend gender binaries.

Maja Bajevic‘s work-in-progress To Be Continued (2011) is presented alongside How Do You Want to be Governed? (2009) a video in which a stoically impassive woman is harassed and tormented by a mysterious male interrogator. The unnerving subtext of the exchange is a poignant depiction of the condition of inequality.

Bulk Targets 1-100 (2018) by Navine G. Khan Dossos are paintings on shooting-range targets, embellished with pink shapes to represent the persecution of women, homophobia and stigma around AIDS, inspired by recent incidents in Greece involving media vilification and victimisation of sex workers.

In addition to similarly themed, thought-provoking work by Suzanne Treister and Georgia Horgan, cohesion, grounding and gravitas is granted to the exhibition by Teresa Margolles‘ Nkijak b’ey Pa jun utz laj K’aslemal (Opening Paths to Social Justice) (2012-2015). Material stained by the blood of a murdered woman in Guatemala – a victim of gender violence – has been embroidered by groups of indigenous female activists and is presented on a plinth in the upstairs gallery. A moving video of the women at work accompanies the piece, and in it, they discuss their objective and process in terms of rehabilitation, solidarity and tribute to the victim.

At the Gates takes its name from the Franz Kafka short story Before the Law; in which the protagonist waits patiently and obediently before a gate-keeper to be granted rightful access to the law, before realising in his death throes that his silent compliance and docility were futile. A more fitting point of reference for both of these dynamic and inspirational exhibitions is hard to imagine. The defiant political perspectives, intellectual rigour and aesthetic power of each work renders this offering by Talbot Rice thoroughly exhilarating. In the words of feminist protesters in 1970s Italy: “Tremble, Tremble, the witches have returned!”