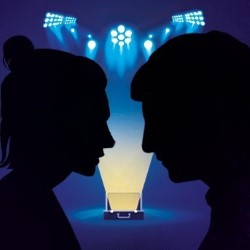 Incisive two-hander is minimalist in approach yet complex in execution

Playwright Jon Gracey‘s super high-concept comedy-drama is a minimalist gem. Two women are in a room with a box. The box contains £1m. A voice informs them that they have one hour to decide how the split the money. If they fail to reach a compromise, each receives nothing. The clock begins to tick.

Gracey’s sharp, bitingly satirical script has the confidence to furnish the audience with only the sparsest of information. We don’t know where this money has come from, who the donor is, or their possible motivation. Neither do we know why these two women have been selected; we don’t even know their names.

All we do know is that these women are strangers to each other, and it isn’t long before the pair are launching into small-scale psychological warfare. Natalie Durkin and Abbie Murphy are given a heavy responsibility and both are hugely impressive in the way they handle the complex, shifting dynamics of the narrative.

Straight away Gracey’s script begins scratching at the thorny issue of class and the North and South divide. Durkin’s Geordie instinctively suggests a 50/50 split. Murphy’s estuary tones jump straight to a more Machiavellian proposal. As the hour evaporates, we gradually uncover more about these women, and the verbal dueling is compelling throughout.  The premise and the staging are so spartan that we have no real reason to care about either of these characters, yet as the clock runs inexorably down we begin to feel a clenched knot of jeopardy thanks to the skill of the actors and acuity of the writing.

There’s also some simple, yet very clever stagecraft. The ‘minutes’ displayed on the digital clock above the actors’ heads begin to shorten as we get closer to the deadline; a cunning bit of sleight of hand akin to the continuously shrinking walls Sidney Lumet employed in 12 Angry Men to increase tension and claustrophobia. It’s almost imperceptible yet begins to chew effectively on the subconscious of the audience.

One small caveat is that our sympathies aren’t toyed with as much as they might be. We’re encouraged initially to side with Durkin and there are rarely any reasons to switch allegiance despite Murphy’s ability to find the humanity – for good and ill – in her vastly less sympathetic character. Yet Ultimatum demonstrates an otherwise tightrope-tottering agility in its densely-packed hour. It’s never less than incisive in its exploration of justice, class, greed, and exploitation. It’s staging and premise may be simple, but Ultimatum is also quite simply an excellent marriage of script and performance.