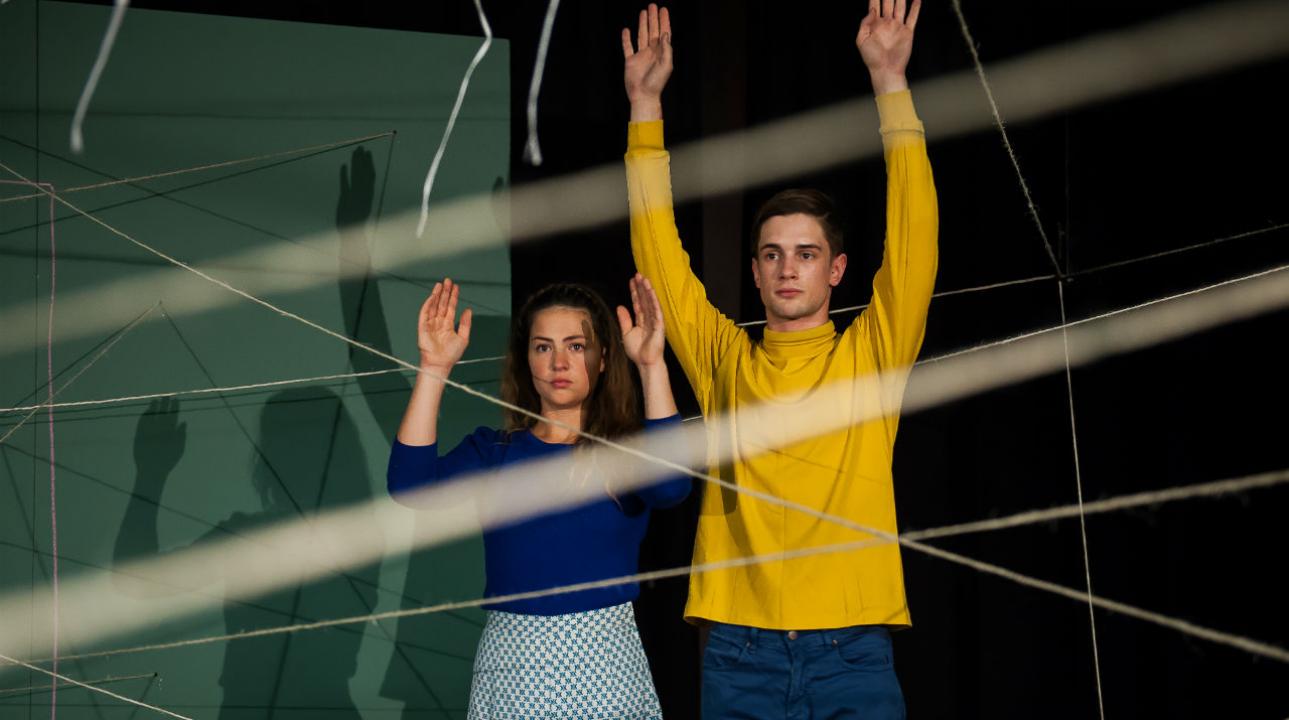 A powerful piece on the terrorism experienced by children that engages with its young audience.

Attempting to portray something as horrific as the 2004 Beslan School Siege, which involved the forced imprisonment of 1,148 people (including 777 children) and ended in at least 334 deaths, is incredibly difficult. Especially when the target audience is primarily children and teenagers. Fortunately, Belgian theatre company Bronks formulates a piece of theatre that not only handles the topic of terrorism in a respectful way but also makes it deeply accessible for the target audience – something that the company prides itself on.

Us/Them retells the events of the school siege entirely from the perspective of two (fictional) children caught in the centre of it all. The stage begins incredibly sparse, with only balloons and the chalk outlines of the school (drawn by the characters themselves) to decorate it. However, quickly ropes are pulled, creating a labyrinthine web that the actors must navigate, emphasising the chaos and tenterhooks the hostages would have been under. All of this leads to a great deal of physicality from the actors – with aspects of dance used throughout – that creates an impressive spectacle while also capturing the youthful nature of the main characters.

The characters themselves are superbly played by Roman van Houtven and Gytha Parmentier, both of which successfully capture the children’s perspective in their performances. Moreover, this perspective leads to a great deal of naivety from the characters, meaning they are unable to fully understand the actions and demands of the terrorists who have taken them hostage. The pair tease each other for not knowing what paedophiles are, dream up elaborate rescue operations to be undertaken by their parents, and ponder whether the female terrorists have moustaches under their masks – as per the rumours.

The result is a unique viewpoint of the siege which is enhanced by a matter of fact, almost detached approach from the characters; something which could only be achieved from the viewpoint of children. This also leads to a surprising level of humour. It might be surprising to find comedy in what would otherwise be a hard-hitting piece, but this bold choice greatly helps the young audience deal with the horror and trauma that is being described to them.

At times, though, the disruption caused by the humour immediately following the more sombre and harrowing moments can be quite jarring, and isn’t always successful as a result – particularly at the play’s conclusion – but this is a minor issue in what is otherwise a powerful piece of theatre that brilliantly engages its young audience.