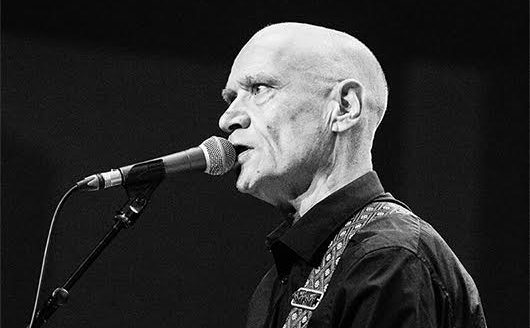 Wilko Johnson has both a distinguished musical pedigree and a quite remarkable life story. He first came to prominence as a co-founder (and the songwriter) of Dr. Feelgood in the 1970s. Three years ago, he was diagnosed with terminal cancer and given only months to live. His response was to embark on a farewell tour and record a new album with Roger Daltrey.

Happily, as with Mark Twain before him, the reports of his (imminent) death, proved to be greatly exaggerated. After major surgery, Johnson is now cancer-free and more than most people can justifiably claim to be enjoying a new lease on life.

From an early stage, Johnson showcases his trademark stage moves, most notably his famous duck walk, while brandishing his familiar Telecaster guitar like a machine gun. He exhibits real stage presence, moving around like a caged tiger.

Johnson is joined on stage by Norman Watt-Roy (on bass guitar) and Dylan Howe (on drums). They are a tight trio who perfectly complement each other. Watt-Roy plays his bass like a man possessed. Howe’s drumming is always tight and efficient. However, the sound is a little muddy at times, with Johnson’s vocals becoming lost in the mix.

Songs like Going Back Home, Roxette, and Sneakin’ Suspicion follow in quick succession of each other. There’s not really any banter with the audience between songs, which is a pity. Johnson’s last Edinburgh appearance (during the Book Festival) demonstrated that he is an entertaining speaker with some great anecdotes.

After about 75 minutes, Johnson finally addresses the audience to thank them for coming along and to introduce the final songs, a medley of Back in the Night and She Does It Right. Watt-Roy joins him on vocals for the chorus of the former. Together they form an R&B dynamic duo.

The band exits to a standing ovation before inevitably returning for an extended version of Johnny B. Goode, where the tempo rises and falls. The audience are clapping along as Johnson plays his guitar behind his head. Well, how hard can that be after his days of studying (as part of his degree) ancient Icelandic?

Johnson remains a class act. He does it right.