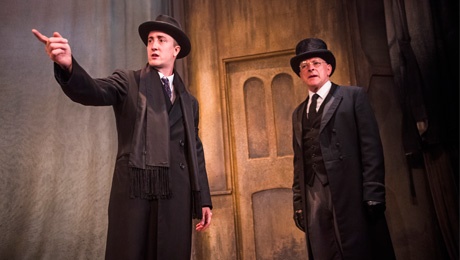 The Woman In Black

The Woman in Black, adapted by Stephen Mallatratt from Susan Hill’s 1983 ghost story, has been running for 27 years. Record breaking in the West End, it is now on a long-running UK tour.

The play starts when former solicitor Arthur Kipps brings his personal horror story to rehearse with a younger actor. Through the trick of a play within a play, the audience is led to relive and endure young Kipps’ experience of 30 years earlier when he visited a remote house in the marshes of the north-east coast of England to close a dead woman’s affairs.

Not without similarities to Hitchcock’s classic Rebecca, the narration successfully retains the suspense, mystery and horror of Gothic tales. Playing with past and present, the characters are performed by only two actors who realistically embody their many roles in an effective and fluid stage direction on a fairly static stage set.

Dramatic lighting effects are simply and cleverly timed, purposefully announcing the change of scenes. A world of foggy and eerie marshes hooks the audience, and foggy appearances of a woman in black bring chilling sequences and ghastly atmospherics to the piece, heightening the suspense and deepening the story’s mystery.

Effective sound effects such as moaning, noises of a carriage accident, screams of a child and his maid, all sensibly convey an increasing sense of discomfort and mayhem to the stage. The audience is prompted to engage, react and scream.

As a basic ghost story, The Woman is Black fulfils its purpose and give a brilliant dramatic experience.