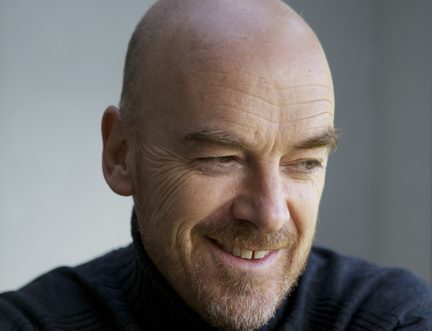 Rhidian Brook, writer of novels and screenplays, regular contributor to BBC Radio 4’s Thought for the Day, and staunch family man, visits Edinburgh Book Festival to promote his latest tome, The Killing of Butterfly Joe. The Wee Review pops a few questions to him prior to his appearance on Fri 24 Aug.

The Aftermath, the gorgeously evocative tale set in post WWII during the carve-up of Berlin is doing extremely well. It has been translated into over 20 languages and now is a soon-to-be-released motion picture directed by James Kent. How did you feel when you found out it had been picked up by Ridley Scott’s production company?

Well, I knew it might be a film before I wrote the book because it was commissioned as a screenplay first. But my agent insisted I write the book as I always had intended, so I did both at the same time. After the book I did another draft of the screenplay then handed it on to others. Screenwriting is constant re-writing and can go on forever, and I had to get on with the next thing.

Do you feel the casting to be accurate for the characters?

The casting process is interesting. You have ideas about who to cast but there are so many variables: availability, suitability, financiability (if that’s a word). The film’s main character is female and there are apparently only a handful of British actresses who can “green light” a film. In the fickle world of film, that list changes yearly. Emily Blunt nearly played Rachael [Morgan], but her pregnancy made it too tricky. Then Keira Knightley was approached and she loved the character and story. She more than delivers. It’s one of her best performances: mature and moving. [Alexander] Skarsgård makes a very good [Stefan] Lubert; sexier than I’d imagined. Whilst Jason Clarke – who I thought an unusual bit of casting – makes a very convincing Lewis [Morgan].

Have you seen it yet?

I have seen the film. It is powerful and intense and different. I saw my first novel – The Testimony of Taliesin Jones – made into a film and it was a thrill. The Aftermath is on a bigger scale but I had the same feeling when I went to the set, which was: you are creating work for a lot of people and this was once an idea I had whilst sitting at my desk years ago…

The Aftermath feels very empathic towards the female characters. Do you find it easy to write women?

I don’t think, “I’m now writing a woman” when telling a story. The only question is: who is the character and can I make the reader believe they are real? I am married to a woman. My mum is a woman. So is my daughter. And some of my best friends are women! Why should it be any more difficult?

The Killing of Butterfly Joe is very different. A young Welshman, Llew Jones, travels to the USA in the 1980s and is drawn in by the charismatic butterfly salesman, Joe Bosco, who, in turn, is drawn by Llew’s accent. Without giving spoilers (it’s in the title), things don’t end well. 1980s America is a place of confrontation politics with Russia and the story has its roots in your own travels. Were the 1980s a time of more innocent acceptance for you?

At the time it felt like an adventure, and a very unusual one. I was selling butterflies in glass cases, working for a charismatic man and his family, travelling all over the USA. I totally fell in love with the USA – the people and the landscape – and it lived up to and exceeded my “idea” of America. Only now, years on, do I realise that the book is something of a love letter to America… But the “American Dream” element (which Joe debunks) is surely less convincing now than it was then.

Do you think your son (Gabriel from Psychopomp) could have such an incredible experience in this era?

I think it is harder to live serendipitously now than it was then. Experiences are more homogenised, things feel more calculated and pre-planned, his generation more sensible.

Recent news that you have been awarded Ffilm Cymru funding to write the screenplay for Butterfly Joe is very exciting. How do you decide what gets left out in order to condense the story for the screen?

The book [The Aftermath] had multiple points of view, whereas the screenplay (necessarily) was reduced to the point of view of Rachael and we experience the story through her eyes. Film is reductive. Butterfly Joe is character driven so the key was to transpose that from book to script, especially Joe. He is the beating heart of the story. It’s a talky book with some talky characters; the dialogue is fun and transfers well, albeit truncated.

How do you deal with the poetic bits of prose which add to the action?

The voice of the book is a harder thing to transfer and I mistrust voiceovers in films. This novel has a filmic (five act) structure which has made it easier to adapt. Structure is very important. A good director would stamp their own voice on a picture.

Is it almost taboo to explore religion in literature? Or is it a safe place to offer thoughtful discourse on otherwise difficult and confrontational subjects?

When faith or religion is depicted in fiction, it is usually extreme and negative: the overbearing religious parent (Oranges Are Not the Only Fruit); the abusive religious leader (The Poisonwood Bible), the dystopian theocracy (The Handmaid’s Tale). It is rare to find faith depicted as a good, as a creative, attractive thing; rarer still to see it portrayed as the everyday “reality” that it actually is for millions of people.  Joe has a simple faith but he shows Llew (the casually atheistic narrator of the novel) that it is possible to be brilliant, intelligent, engaged and funny whilst believing in a created order, the efficacy of prayer, the possibility of God. Reality is not just about what can be quantified. I think writers instinctively know this and indeed rely on it. As Shakespeare puts it: “There are more things in heaven and earth, Horatio, that are dreamt of in your philosophy.” Ultimately, a novel (whether written by a person of faith or none) requires and tries to justify the assent of the reader, asking them to believe in its possibility and reality. And if a writer succeeds in doing that they have achieved a small miracle.

A few years back, a publisher asked me what I was writing. I told them it was a novel based on my experiences selling butterflies in glass cases in America and they seemed curious; but when I mentioned that my main character was an American who believed in God but who had little time for religion, they hesitated. Is it going to be a religious book? “No. Not really,” I said. “My character is just reacting to the religiosity of his culture whilst holding on to a faith. And that gets him into trouble.” The conversation moved on to other things but it left me unsettled. The unspoken implication was “we don’t do God.” This prejudice was not new in my experience. Ten years before, after writing two novels  – The Testimony of Taliesin Jones and Jesus and the Adman – that were explicit explorations of the God question, a journalist suggested that I would be a more successful novelist if I stayed away from religion. “People just aren’t interested in the ‘God stuff’.” Perhaps they were right. My third novel – The Aftermath– didn’t explore faith in the same way (although I would argue that forgiveness, justice, reconciliation are all faith concerns) and it sold far more than the previous works. Redemption, if it exists, is something a person has to find for themselves, without the help of outside agency. The mysterious is not to be trusted. Reality is what can be seen and measured. This life may be a wonder, but it is a random and pointless one and there is no One to thank for it!

What next, creatively speaking?

Making the screenplay of The Killing of Butterfly Joe bullet proof.