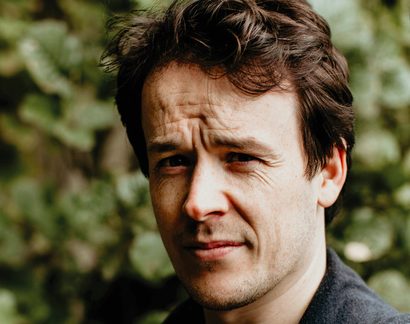 Introducing Niall Campbell and Roseanne Watt to a sodden audience clustered in the Writers’ Retreat, host André Naffis-Sahely queries the event title; as winners of the Edwin Morgan Poetry Prize with published collections, both writers are arguably already ‘firmly established stars’ within the Scottish poetry scene. As well as their shared award-winning success, the justification for bringing the two together seems to be their island backgrounds: Campbell is originally from South Uist in the Western Isles, while Watt hails from Shetland.

Tonight the audience are  hearing from their recently published work: Roseanne’s debut, Moder Dy, and Campbell’s second collection, Noctuary, both released this spring. Campbell kicks off the evening with a brief chat about his writing process – conceived in the aftermath of his son’s birth, his poems mark a break with traditional notions of the poet as an isolated creator. Campbell explains that a ‘Noctuary’ is a diary for the late hours, and that many of his ideas were developed while up late with his son. Written in the margins of this busy time, his slow, restorative poems reflect their anchoring in family life, addressing the responsibility and newness of fatherhood. He ends his reading with a particularly lovely image of a lamp lighter walking dark streets.

Watt is engaging and animated, reading a selection of poems with varied themes: the childhood haunts of her partner, a fellow Shetlander; the raingoose, a bird thought to be able to predict the weather; a nightmare about an octopus. She discusses her interest in eco-horror and her work combining poetry with film, and gives a fascinating account of her experience of growing up and moving from a bilingual mode of being to one where the English language took predominance and Shetlandic became relegated to the domestic sphere. This concern with language is at the heart of Moder Dy (‘Mother Wave’), where the poems appear in both Shetlandic and English. She explains how she chose to have the Shetlandic versions placed slightly higher on the page, an implicit inversion of the Anglocentric linguistic hierarchy. The English translations are also, Watt explains, somewhat unfaithful – and they contain Shetlandic words, which she translates for the audience before reading each poem.

Her poems are excellent, leaving the audience straining to catch every word over the clatter of rain, but it’s when she moves on to her last poem of the evening, reading for the first time in Shetlandic, that they become really spellbinding. Campbell, who studied Romance languages, also expresses his admiration for ‘the vandal translator’, and is quizzed by a member of the audience about why he doesn’t speak Gaelic. With a conversation so focused on the nuances of language and translation it would have been wonderful to hear more of Moder Dy read in Shetlandic.