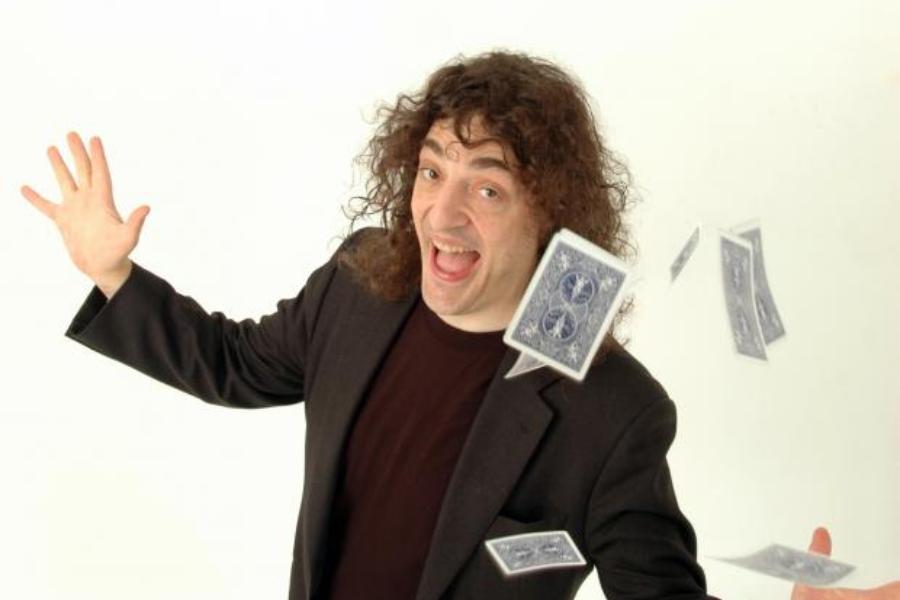 There are three things that should debar you from debates about comedy.

The first is using the phrase “so-called comedian”.

The second is deploying your own subjective “it’s not funny” as a trump card.

The third is the Reductio Ad Jim Davidson – the strange logic by which if you’re not a full on cheerleader for the currently dominant wave of progressive comedy, you obviously want to sit around laughing at Chalky and watching Up The Elephant reruns.

All three tendencies have been in evidence in the current hoo-ha around the cancellation of Jerry Sadowitz at The Pleasance EICC. Tediously, this has been co-opted as another battleground in the culture war by people who know little about the Fringe or comedy.

I will, in fact, debar myself from debating the specifics of the case. I’ve never seen Jerry Sadowitz. I know him only by reputation, clips and this 2017 piece by our writer Raja Sharma, which to me brilliantly captures the essence of what everyone’s been arguing over the last few days. But I wasn’t at Friday’s gig. I don’t know what he did. I don’t know who complained or why.

But I do know the Fringe. And I have read both sides’ statements. And I have watched as comedy and the Fringe has changed over the past 20 years. And whatever actually went down – as I said, wasn’t there, can’t comment – I am glad the bloated corpse of comedy at the Fringe has been ripped open in this way so we can all have a good old pick at its entrails.

For me, there are two realities that both the “you can’t say anything any more” brigade and the “context doesn’t matter” crew have to appreciate.

Number one: The Pleasance is not in the business of providing us with the Wild West, no-holds-barred Fringe of ancient myth. Like all the Big 4 venues, it is expedient for them to perpetuate that image – hence the insistence in their statement that they champion free speech – but the reality is that they are homogenising, commercial forces. Broadly speaking, for their comedy output, they have an older, small c conservative audience, who want to be served the next generation of TV regulars, and a younger, small c conservative audience, who want to see diverse comics tackling social issues.

Jerry Sadowitz is neither.

Sadowitz at The Pleasance was a weird one to begin with. It is actually quite funny – obviously not for him or The Pleasance staff dealing with the outfall – that this has laid bare one of the Fringe’s main fissures. In 2022, it is a ridiculous match-up: the unstoppable force of cosmopolitan mores represented by Pleasance staff and patrons and the immovable object of the objectionable dude in the top hat. Oh, to have been a fly on the wall.

But this is the modern way. Let’s not have a boycott about it. And please God, let’s not have an “I’m Spartacus” style whopping out of male members or gratuitous p-words in protest (if indeed that was the Sadowitz issue). Let The Pleasance continue feeding comedians into the industry sausage machine and squeezing them out blander, but more saleable. That is the modern raison d’etre of the Big Four – to knock the edges off comedians and make them palatable, ideologically and stylistically, for the panel show and touring circuit.

But that’s OK, because the other reality is this…

Somewhere between actual unfunny reddit edgelords and the people nudge-winking that anyone who likes their comedy spicier than The Daily Mash is a fascist-in-waiting are a group of performers and punters, perhaps not as numerous as there used to be, that actually get it. That realise there are lines, but everyone has different ones. That realise honing a comedy set is not a precise science and going too far is a hazard of the job. That realise policing performance may save someone’s feelings in the moment but will stifle comedy in the long term. That voyaging to dark places in the context of a comedy gig is not the same as acting it out in real life, any more than wondering what it might be like to kill someone is the same as actual murder. That comedy can have a message but it can also be brutally, shockingly dark, or, in the words of one comic I saw this year (Andy Field, review here) just ”fun and dicking around”. That, above all, the biggest guarantor against untold fascism being unleashed from the stage is the box office. Actual hate isn’t funny and no-one would pay to see it.

It’s not wrong for these people to want a Fringe that is what it purports to be – an uncensorious free-for-all – but it’s misguided to expect the Pleasance to deliver it. Render unto Pleasance the things that are Pleasance.

You can of course still see anything at the Fringe. It isn’t quite what it was but on its mad outskirts, there is still that frisson of walking in a room knowing you may be about to watch a breakdown, or a bloodbath, or if you’re lucky a very nice chap cooking you chickpeas while explaining his home-made cough remedy (this year at Monkey Barrel!). And there are still venues and promoters and publications – I’d like to think we are one – that understand that. Support those performers and organisations and the Fringe will renew itself and refind its mojo. We need that freedom again, not because we’re all budding Alf Garnetts dying for someone to ‘do an accent’, but because removing comedy of any tension whatsoever by a need to ‘align with our values’ is boring.

Now, I’m off to tell some so-called comedians they’re not funny.