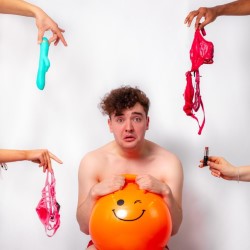 Superb ensemble does justice to the script

When a student company gets the rights to perform a play as successful as 1972: The Future of Sex, originally devised by the Wardrobe Ensemble and award-winning back in 2015, you have to hope they have the chutzpah to pull it off, because it could easily go wrong. This is in the main a success, with superb ensemble playing that does justice to the script and captures the right mood.

Set at the apex of the sexual revolution, the optimism for a freer future when people can be who they want to be, and able to love who they want is a heady mix. Of course, it’s not as simple as that as human frailty surfaces. We follow those longed-for but naïve first sexual connections; of Christine who thinks this is the moment with singer Rich, Penny the student enraptured with lecturer Martin, Anna who is swept up by the seemingly impossibly cool Tessa, and Anton whose struggles with his identity feel particularly relevant now.

With seven actors on stage, switching from main to supporting roles, taking turns to narrate or voice the thoughts of the characters from the four corners of the stage, sharpness is essential, and the ensemble playing is spot on, the scenes succeed each other seamlessly, and the timing is great. With so many small cast productions on the Fringe, it’s good to see an ensemble working so well together in a relatively small space. They capture the innocence and energy of the characters and take them seriously. The performances are touching but they aren’t afraid to go for the laughs when they’re there – the space hopper moment is marvellous.

However, the one major drawback with the production is that the staging appears to have been designed for an audience facing the stage. In this setting on three sides, those off to one side were regularly shut off from the action by the blocking. It really was a shame as the rest of the performance couldn’t be faulted. So do go and see it, but sit facing the stage.