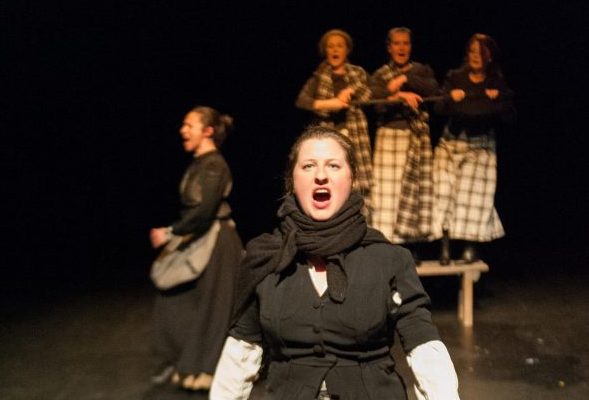 A Bench on the Road

One of the “fun facts” given in my old Edinburgh University Freshers’ Guide to try and acquaint us incomers with our new home was “all Edinburgh chippies are owned by Italians”. It wasn’t true obviously, but a few post-pub fish suppers soon confirmed it was as good as. The Italian diaspora have had a big impact on Scotland, and not just in the late night fast food market. One can immediately call to mind venerable Scottish businesses like Valvona and Crolla and the impact that Scots-Italians like Eduardo Paolozzi, Daniela Nardini, Tom Conti and Sharleen Spiteri have had on our cultural life. There is definitely a story to be told about this early modern immigrant population, but A Bench on the Road doesn’t effectively do it.

Writer and director Laura Pasetti developed this script using interviews done by the University of Edinburgh with immigrant Italian women. The desire to give voice to those immigrants is clear and understandable, yet it gives rise to a style which is essentially verbatim theatre, with all the weaknesses of that form and few of the benefits. The show opens, for instance, with the testimony (in a mix of Italian and English) of several Italian women from across different generations from the late 1800s to mid 1900s. But we’re offered little more than base biography – name, place of birth, marital status, maybe a simple statement of longing or sadness. Rather than these women being fictionalised and given time and space to breathe as characters, they’re reduced to a set of facts to which is attached the common and fairly obvious set of hopes and fears of the immigrant. Their stories are as inscriptions on a headstone, or notes by a museum exhibit, not something that can flourish on stage. We never fully connect to them as individuals.

They don’t stay around long either. Each scene brings a different set of women, and more short, skin-deep testimony that commits the dramatic sin of telling not showing. One insists on stating their identity. “I am Scottish. I was born in Scotland.” Yes, I know that, and so does everyone else in the room. Show us some people thinking otherwise, show us the effect it has on you. In many scenes there are three Scottish women to act as a counterpoint to the Italians, but rarely do they exhibit palpable hostility. Such animosity as does exist is once again largely told not shown.

When we arrive at the Second World War, we hit a potentially rich dramatic vein. Italians in Scotland became personae non gratae during the War on account of Mussolini’s actions; some were deported, others were interned. Although it’s obvious that happened when you think about it, it’s still a rarely mentioned aspect of the war that makes one bristle. One woman reports that as her brothers were away fighting for the British Army, her father was being deported. Therein is a drama in its own right, a story full of tensions and injustices that seem difficult to unravel. That could have been something to really get the teeth into, but it’s gone in a blink. She reports it, and moves on. As throughout, depth is sacrificed for breadth.

It also draws attention to the absence of men on stage and the motivation behind it. If this is an immigrants’ tale, why the focus on female immigrants? A wider story could have been told including men, especially in scenes where they are being separated from their families in wartime. Yet if the intention is to foreground a female perspective, why does that not come across more strongly? Aside from some depictions of motherhood, there’s nothing here that represents that distinctively female experience. Most of what is conveyed – separation, loss, fear, hatred – is universal. As it stands, the all-female approach seems arbitrary. We’re not taken deep enough into the characters to indicate why they are the ones chosen to tell this particular story.

It is a shame to have such potentially rewarding subject matter told in such a fleeting and superficial style, since there are some very good performances from the cast of six, particularly Helen Cuinn and Vanda De Luca. There’s some gorgeous folk singing, accompanied by accordionist, Caroline Anderson Hussey, and the direction is very good. In particular, the sinking of a ship full of deported Italians is choreographed beautifully for full emotive effect, with a set of rosary beads doubling as an anchor as the ship goes down.

To its credit, A Bench on the Road does draw attention to an immigrant population that have become such a part of Scotland that, by contrast with more recent groups, they go largely unnoticed. In fact, the play’s success and its downfall is that it makes one want to understand the Scots-Italian perspective in much more depth than is ever offered here.