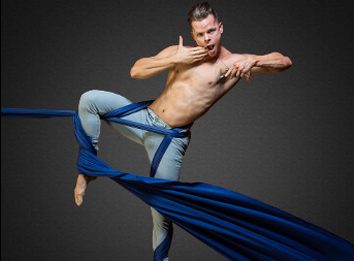 A show that doesn't quite live up to its promise

not without its enjoyable moments

Aaron Twitchen: Curtain Twitchen is billed as an “aerial-circus-stand-up fusion show”. It’s an intriguing concept but one that quickly transpires to be a bit of a gimmick – this revelation coming from Aaron Twitchen himself within the first five minutes of the show.

Aaron has a big, fun personality and it’s this – rather than the aerial or the comedy – that holds the show together. He’s up front about that fact that this isn’t going to be a polished Cirque du Soleil style performance and describes his previous stand up gigs as “underappreciated” but the hour long exploration is a little awkward at times as he questions when the audience don’t respond to a joke and gets stuck in the aerial silks – whether intended or not, it’s hard to tell.

The two elements of the show remain frustratingly separate as the stand up takes place on the floor and the aerial silks are used in sections between the comedy. Aaron makes a few attempts to integrate the two but mostly this means he’ll pause in a move and talk to the audience from there. There’s a nice moment where he tells a story about clubbing and uses the silks as a pole that suddenly everyone thinks they can perform on. It’s a small glimpse of the comic potential of more fully combining the two elements of the show.

The end of the show takes a sentimental turn as Aaron explains that the co-creator of the show, his best friend, ended up ghosting him when her new boyfriend decided he didn’t like him. Aaron’s not going to let this slow him down though and the final silks performance is an empowering, powerful piece that demonstrates his skill with the equipment.

A slightly worrying part of the performance was the unexpected addition of alcohol into the mix. Aaron confessed to the audience that he’d drunk a pint of beer before coming on stage and then drank some Kopparberg and wine from audience members. This made the elements of the show on the silks seem a whole lot more dangerous and does seem a reckless and irresponsible way to approach something that is inherently a dangerous art form. It made for a stressful climax to the show and is something that should be cut from the act.

This show is not without its enjoyable moments and Aaron’s big personality somewhat saves it. It would be interesting to see him take this concept and develop it to see where it could go next.