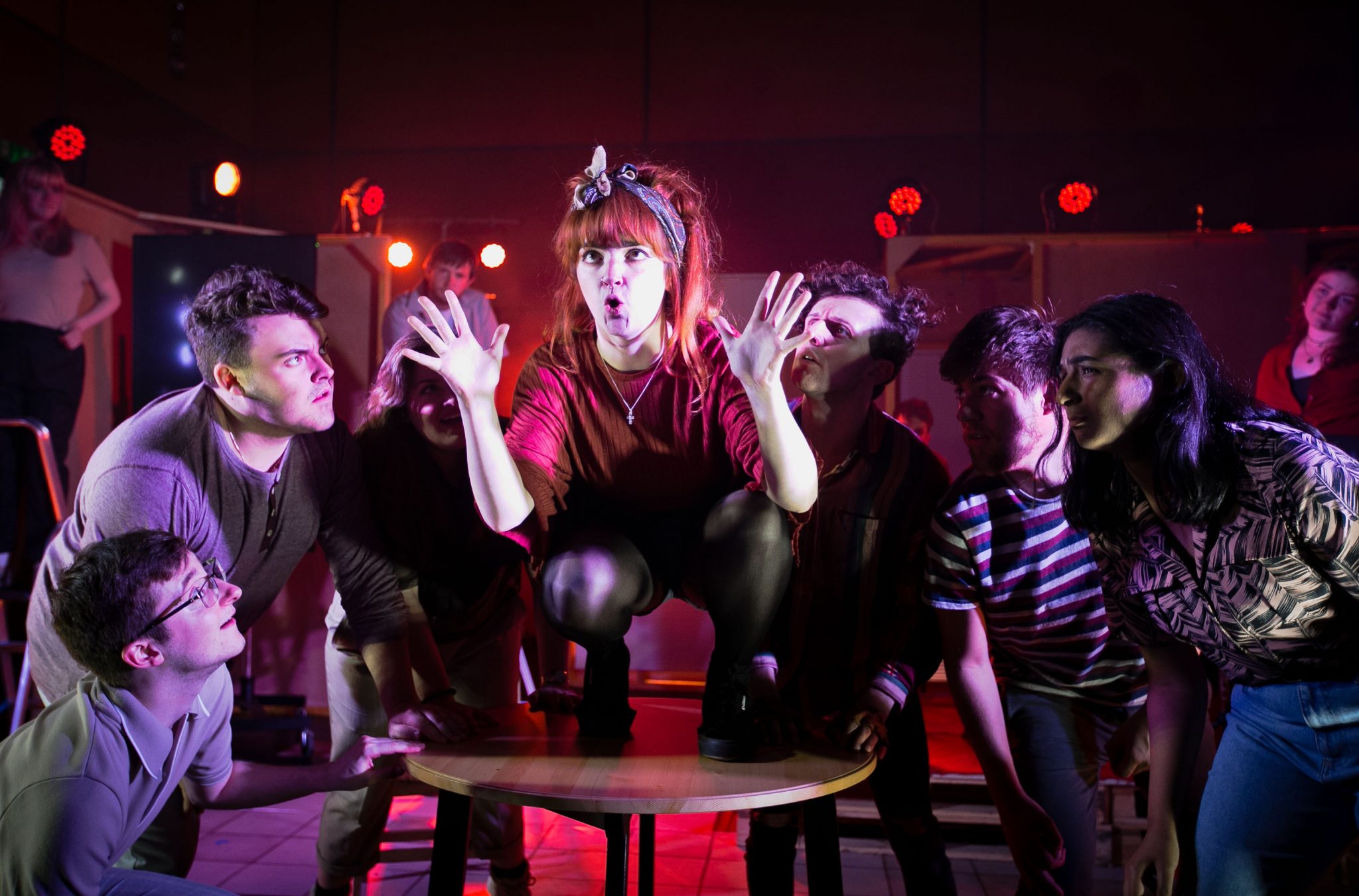 An electrifying performance exemplifying the writing and acting talents of Scotland's young actors.

Challenging the gods is a bad idea: take Prometheus’ word for it. And the quasi-divinity ‘Olympia’, which controls much of the dystopian near-present world in Scottish Youth Theatre’s Act of Repair, does not welcome challenge. The electrifying production – devised and written entirely by the young ensemble with professional mentoring – explores contemporary behaviour and attitudes around social media, privacy and surveillance.

It is a triumph, both in evoking the lives of diverse young characters, and in demonstrating the national role of SYT in developing talent through significant projects. In the hectic blizzard of the narrative, it would be easy for the drama to drift into impassioned soliloquies against loss of privacy, data breaches etc. Yet, because character development is foregrounded, we inevitably identify with the array of characters, in their liking/not liking, tweeting/retweeting, posting, blogging existences. Their responses are plausible, and we wonder how we ourselves might deal with the seductive charms of ‘Social Media Influencer’ Amber Latte (Rachel Bell), the ‘Voice Service’ Hestia, and – with a brooding stage presence via giant screens – the ubiquitous, apparently-benevolent ‘Olympia.’

Olympia’s sinister authority is brilliantly personified by Hannah Yahya Hassan as Ivy and Rebecca Riddell as Cynthia/Hestia. They, along with the others embodying the cold, intimidating corporation, are blind and deaf to those dissatisfied with the easy online world quietly engulfing them. But resistance begins. A seditious tone is heralded by the signal-free ‘Sanctuary’ and the apt motifs of house band Seabass and the Waves. Impressive musicality and versatility are evident in Chaya Gupta (Turtle) and Tsen Day-Beaver (Rae). The one-act drama gathers pace, its hold strong as character delineation in performance becomes paramount. The confident stage presence of Laura Milton (Shrimp), Ronnie Brodie (Finn), Catherine Tausney (Seabass), Katryn Muir (Flounder) and Phoebe Byrne (Quinn) emerges strongly. Their conspiratorial defence of the human, in the face of the deadening monsters of a robotic present, is bold. There is also great assurance in the performances of Michael Black (David), Christopher Scanlan (Eddie) and Melissa Meighan (Roxy). The humour of Glaswegians proving incomprehensible to the Voice Service was not lost on the Inverness audience.

While the fantasy drama is effective in realising through character our growing reliance on devices, and accompanying concerns about data sharing and invasion of privacy, there are weaknesses. Dramatically ill-judged scenes involving a futile resistance plan to ‘Stop the Internet’ take us to B&Q and then to waters off the Cornish coast. The attempt to lighten the tone merely undermines good character work elsewhere. And while clearly enough established as a safe place, the ‘Sanctuary’ could, you feel, operate more strongly in juxtaposition to the ‘Smart Home’ ideal promulgated by Olympia. Effective and simple mise-en-scene in set, costume and lighting reinforces the core atmosphere of tension.

The ensemble’s epilogue, a fearful nod to the future, is effective; all in all, this is a successful venture by SYT. While the central difficulties of one single organisation creating quality work – both from scratch and with limited time available – across Scotland remain, Act of Repair was definitely worth the time and effort.