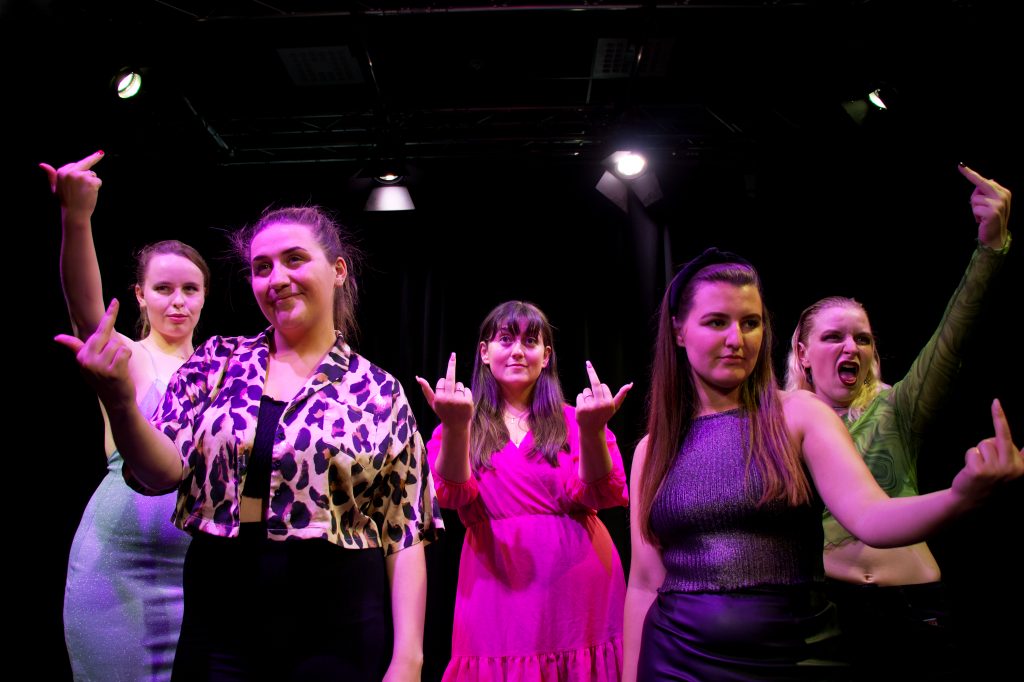 Afterparty is a brand new play by Rachel O’Regan. It tells of five students celebrating their last day of hated school, casting off their uniforms and embarking on a riotous night out. Initially euphoric as lives of freedom stretch out in front of them, they drink, they snort, they flirt – until things get out of hand. Picking up the pieces subsequently, it becomes clear that they all had very different summers to the ones they had imagined.

F-Bomb Theatre are a new company, setting out to put women’s stories centre stage. You’ve probably seen versions of this story before. But what makes it a bit more interesting than the average end of school high jinks is the setting. Most of these girls are from families who don’t have much. Ella (a supercilious Annie Welsh) has a daddy who’s rich enough to buy her a way out of the limited prospects available locally. Lexi (Sally Cairns) is relying on exam results to make an escape, hoping against hope to get to university. Corrie and Jess can’t imagine why anyone would ever want to make an escape. And this is the story less often seen on stage.

O’Regan has done a neat job with the script, creating five distinct characters and enough twists and turns in the plot to hold our interest. The play ends with a poignant moment of dawning realisation that this is it for these girls – their nights out are now all they have left. The cast brim with conviction. And Emily Pemberton is a lovely counterpart to the delirious excitement among the other four as they embark on their night out. Director Hannah McEachern has done a cracking job of conveying the brash confidence and the boisterously infectious glee of the group as they catapult out of school and into the world.

This is a fascinating opening salvo from F-Bomb Theatre. The rest of the run is sold out – but keep your eyes peeled to see what they do next.