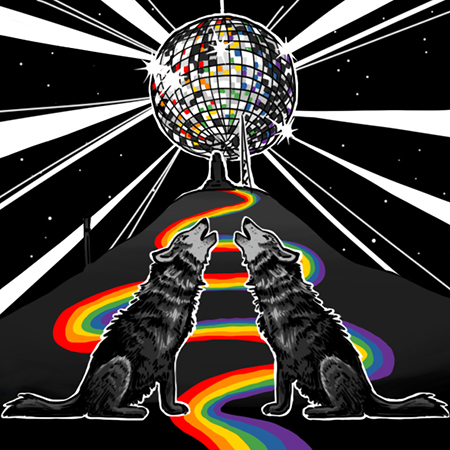 Afters is a witty, cleverly written, and hilarious queer comedy by Mareth Burns that truly captures Dundee, student life, and the terror surrounding the future.

Following Molly, a physics student approaching graduation, Afters takes the audience on a whirlwind tour of Dundee nightlife, with plenty of supernatural twists and turns as well as a healthy dose of odd characters. With her friend Nick, Molly traverses a truly unique coming-of-age narrative which results in a heartfelt and genuine sense of self-discovery.

The small cast manage to bring life to the script and keep the energy high throughout the performance, with excellent comedic timing and delivery keeping the jokes surprising and entertaining. The action is also well-paced, with the narrative never losing steam and giving plenty of time for the characters stories to be developed. The jokes throughout the play are consistently well-written and placed and the laughs are constant.

The sense of adventure which the play creates is palpable and there is a real feeling that the audience is being transported, with the realism of the characters and the ingenuity of the plot combining to create a theatrical experience which is riveting.

Dundee is represented brilliantly, with instantly recognisable landmarks and stories. From the beloved Clark’s bakery to the Strathmartine dragon to the eclectic array of statues on the High Street, the setting is vividly portrayed through the dialogue, with local references gaining cheers and laughs from the audience.

The plot centres around queer self-discovery and identities, and the representation of the stories told is wonderful. It presents fully realised and developed characters who discuss gender and sexual identity with honesty and complexity, which adds another layer to the action. The play feels sincere and delivers an important portrayal of  LGBTQ+ experiences.

From werewolves to time-frozen parties, Afters provides plenty of surprises and the supernatural elements are woven expertly into the character-focused narrative. The Pie-d piper, with his half-Dundee FC, half Dundee Utd FC strip and jester’s hat is a brilliant addition – providing riddles to Molly and Rick and some truly hysterical attempts at Proclaimers songs on a plastic recorder.

Overall, Afters is a hilarious and unique comedy which captures Dundee with startling clarity, while showcasing excellently written jokes and well-realised characters.