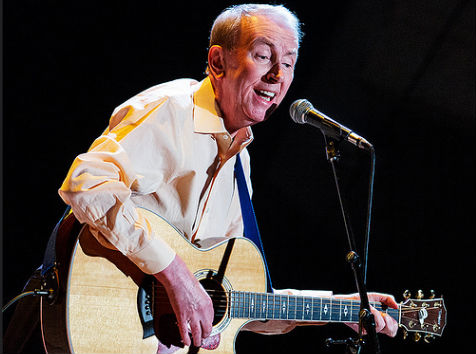 American multi-instrumentalist Dave Nachmanoff opens tonight’s TradFest concert with three songs, before announcing the imminent arrival of Al Stewart as, “the king of historical folk rock…,” before mischievously adding, “…a genre of one.”

Scratch the record collection of any late period Baby Boomer and they’ll get very upset. These things are expensive! However, once they’ve calmed down, it is highly probable it will feature Year of the Cat by Al Stewart. It’s an iconic album.

Stewart duly joins Nachmanoff and after a few songs together, Tim Renwick also enters proceedings. The trio deliver a triumvirate of songs from Year of the Cat, namely Flying Sorcery, Sand in Your Shoes and On The Border. The latter of these opens with highly impressive guitar from all three musicians. It ends with sustained loud applause from the audience.

Unexpectedly, the opening bars of Substitute by The Who make a cameo appearance. Stewart confesses, “I can’t sing it, but I’d love to play it.” A spirited rendition of Time Passages then receives a rapturous response.

After an interval, proceedings resume with another three songs by Nachmanoff. Re-entering the arena, Stewart tells of a disappointed teenager who once knocked on his hotel door at 8am. He’d been expecting to find Rod Stewart. Titter ye not!

Stewart’s singing voice has lost none of its warmth and charm over the years. The Palace of Versailles resumes his set. One Stage Before follows, which is rewarded by the loudest applause of the evening so far.

Surprisingly, Stewart reveals Robert Fripp gave him lessons on jazz chords (when both were teenagers). Fripp later confessed that Stewart was the only one of his students to make it, doing so by ignoring everything Fripp had taught him.

Stewart shares a tale of a 1975 tour supporting Linda Ronstadt, also involving a car crash, and a Southern Sheriff reminiscent of Rod Steiger from In The Heat of the The Night. These improbable circumstances are the backdrop to the origins of the song, Year of the Cat, which inevitably ends the set. The resulting applause is so loud, Stewart’s closing remarks cannot be heard.

Encores of If It Doesn’t Come Naturally, Leave It and End of the Day (an audience request) conclude the evening.

As audience and performers exit the arena, the prevailing mood can only be described as… feline groovy!