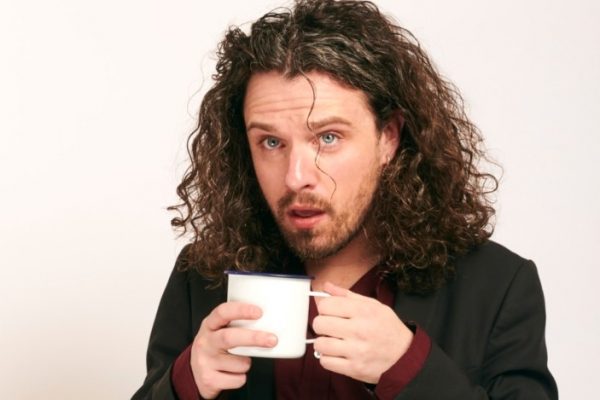 Edinburgh’s Monkey Barrel is packed tonight, and it’s a lively crowd. Some punters are, perhaps, a little too keen to join in, but it’s all basically good-natured. Our opening act this evening is Amy Matthews, no stranger to the Monkey Barrel stage, who does a good job of priming the room. Her star feels very much in the ascendant at the moment, and she’s a confident performer. Her material sits – sometimes awkwardly – at the halfway point between a down-the-Barrel club set and some slightly longer-form nuanced material. It’s all received very well tonight.

Observational comedy about bus stops can be (and often has been) groaningly hack. In the hands of a lesser comedian, that could have been the case tonight. But for Alfie Brown, the bus stop anecdote which bookends and scaffolds Lunatic is merely a metaphorical jumping off point, and is never allowed to descend into the predictable or mundane. Brown is excellent, his performance polished and his authorial voice definitive and ever-present. He’s very likeable, deceptively charming, and flirts confidently with his audience throughout. He likes to proselytise, and even though one of the core tenets of his show is a discussion of the rights and wrongs of just such on-stage demagoguery, he occasionally allows his clever verbal construction to overwhelm his narrative. There’s a real bite to his bark, though, and he repeatedly delivers clever gags and solid observations that steal past the audience’s defences.

Tonight, Brown’s expertly constructed narrative is undeniably derailed by an audience commotion right at the most critical apex of the story. Within seconds, it’s obvious that the crescendo to which Brown has been building is now abruptly deflated. The pace and rhetoric stagger to an awkward halt, as we all wait to see how he’ll artificially return us to the point of emotional climax to which we’d followed him moments before. Instead, Brown makes one of the best performance decisions The Wee Review has seen in quite some time, and takes the show in a totally different direction.

Brown pauses the narrative to explicitly acknowledge the disruption.  He’s obviously floundering but never panics, and he spends several minutes indulging some (rather good) off-the-cuff crowd work. It’s obvious that this breathing space is as much for his benefit as ours, but when he finally returns to his central thread, it’s with such a smoothly-orchestrated handover that we barely notice the switch – and you’d better believe were we looking out for it. It really is a masterful performance, and it’s during these unprepared moments that we get to see a glimpse of the emotional honesty and in-the-moment engagement that’s sometimes missing from the rest of the show.

When he’s at his best, Brown is superb. Hypnotically engaging, with an erudition and command of language many other performers would give their left cliché for. He’s unflinchingly honest in his self-criticism, too, and if his acerbic put-downs of the people and foibles that surround him can sometimes verge on cruel, it’s offset by the crucible that he turns on himself. Brown is not the hero of his show, but he is undeniably the master of it.