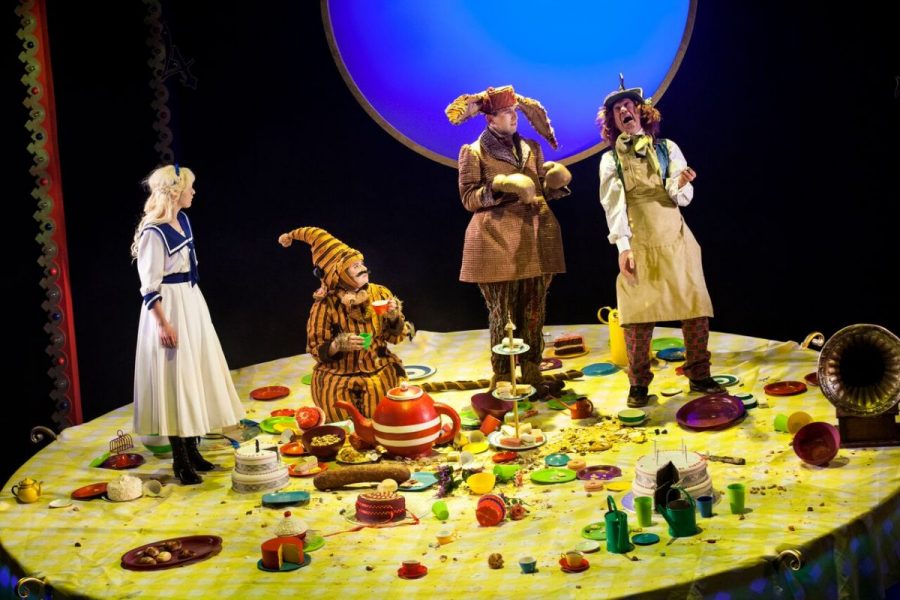 A superb re-imagining of an old classic full of character, soul and wit.

Filled as it is with fantastical beasts, devilishly clever wordplay and a protagonist who just can’t seem to stay the same size for more than five minutes, Alice in Wonderland represents quite a challenge to bring successfully to the stage. In his adaptation, Anthony Neilson uses a variety of tricks and set-pieces to pull off the feat with aplomb.

From the hot air balloons hanging over the audience to the spinning construct representing The Mad Hatter’s tea party, thought has gone into every aspect of the stage presentation and it pays off tenfold. Effective use of the giant videotron and the harness and grapple line are instrumental in bringing Alice’s fall down the rabbit-hole and her various transformations to life with ease, while the costumes and props have all been chosen with care and precision, resulting in a sleek, believable and thoroughly enjoyable production.

Meanwhile, the liberties that Neilson has taken with the source material add rather than detract from its overall effect. The songs are punchy and memorable, while there are certain nods and winks to contemporary influences that ensure older audiences are kept as enrapt as the younger ones. Liberal use of regional accents imbue each character with their own endearing personality, from an Italian dormouse (who makes doors) to a Welsh gryphon (who boils his best friend for profit).

As for the cast, each of them pull off their various roles impeccably. Jess Peet steps comfortably into the title role in her stage debut, Gabriel Quigley delivers a suitably pompous performance as the Queen of Hearts and Tam Dean Burn is just the right amount of crazy as The Mad Hatter (although perhaps more memorable as a disembodied baby’s head). Elsewhere, ensemble actress Zoë Hunter steals just about every scene she pops up in, appearing variously as the caterpillar, the fish and the gardener.

For a production that maintains all of the fun and fervour of pantomime while simultaneously ditching all of its cringiest moments (there is not a single tiresome Punch and Judy convention in sight), Alice in Wonderland hits its mark with flamingo-croqueted precision. Younger audiences will love the novelty and the mayhem, older ones will marvel at the ingenuity and the execution, but all will go home far richer for the experience. A real Christmas treat, even for those not traditionally keen on the panto genre.