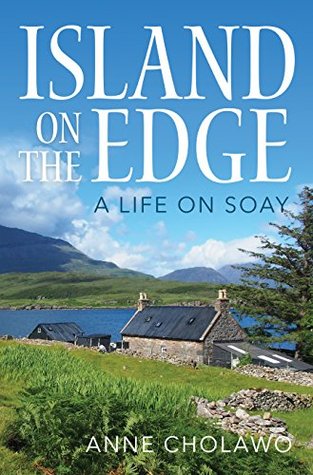 Anne Cholawo
Island on the Edge: A Life on Soay

A writer moves to the Outer Hebrides and learns to live a quieter but also more challenging life.

More than 28 years ago, in 1989, Anne Cholawo was a young girl working and living in central London, living the 80s dream of many similar young girls, until a fateful day when she decided to turn her life upside down by deciding to move to Soay, a speck of an island off the coast of the Isle of Skye, in north-west Scotland. She still lives there and Island on the Edge is the autobiographical account of her life on a remote island, without any amenities.

Exactly a hundred years ago, in 1889, Frederick Rea also moved from England to a very remote and desolate South Uist. There are remarkable parallels between Rea’s and Cholawo’s accounts, even though they are separated by a century. The Hebrides continue to be cut-off from the mainland in terms of resources, and that also brings with it the isolation from news, current affairs, and the speed at which the world moves on.

That takes nothing away from Cholawo’s life on Soay. Quickly having to fundamentally change her lifestyle and become a much hardier individual, she leans on her fellow islanders for help and support. The caricatures of the amazing community of people are brought to life through her retelling of her first couple of years on the island, which are hard going and rewarding in equal measure. Her lucid descriptions of the stunning beauty of nature on Soay, as well as the experiences she has with trying to find a ‘trade’ for a constant income in the ever-changeable weather, make this book a very engaging read. As time passes, many of the islanders leave and fewer new people arrive to stay on. The island’s population has dwindled from 17 to three, but Cholawo has learnt to live in a self-sufficient fashion with minimal requirements and has also found love and companionship, which to me seemed less of an effort for her than air-lifting her piano.

There are some slow parts of the book, in particular a lot of detail on the maintenance of boats but this is just a minor point in what is otherwise a fantastic read.

For those that love reading about the wistful beauty of the Hebrides and the quite heroism of a human dream fulfilled, this book is a recommended read.