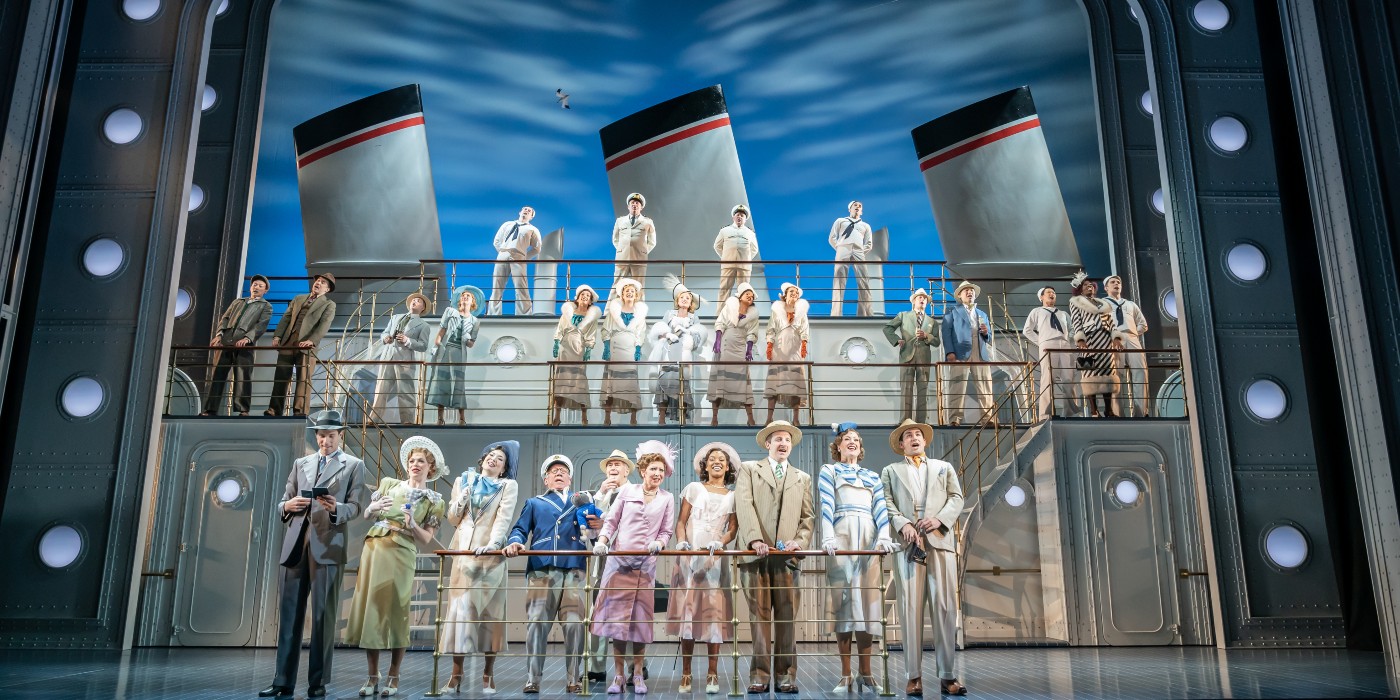 Throw together Cole Porter and P.G. Wodehouse and they’re bound to concoct something elegantly daft. Kathleen Marshall’s production of Anything Goes proves this perfectly by being a stylish tribute to the two writers’ classic madcap concoction.

Reno is in love with Billy, who’s loved by almost everyone else but especially in love with Hope, who’s engaged to be married to Lord Evelyn, who’s still carrying a candle for little Plum Blossom, who turns out to be – you get the picture. Throw in a ship’s captain desperate for a star turn to keep his cruise customers happy, a mobster on the run, a chihuahua, six strapping sailors, and an ebullient live band and you have all the ingredients you need to set sail for an evening of wonderful entertainment.

For a silly story first performed in 1934, this musical is notable for its feisty female characters. Nicole-Lily Baisden is sweetly simpering as Hope Harcourt, the young ingenue. While Bonnie Langford musters a masterful fainting flutter in the role of Evangeline (Hope’s mum) as her prospect of financial security appears to be dashed. But these roles are the (expertly executed) clichés. Carly Mercedes Dyer is throatily magnetic as mobster’s moll Erma, while Kerry Ellis in the role of Reno proves to be the commanding conductor of the whole riotous shebang from the moment she slinks onto the stage.

The strength of the cast extends to their male counterparts as well. Denis Lawson is effortlessly charming as nimble-fingered mobster Moonface Martin and Haydn Oakley is a tripping-over-his-etiquette treat as the lovelorn Lord Oakleigh, culminating in a staccato tango that has exactly its desired effect. While we didn’t get Simon Callow as Elisha J. Whitney (though he’ll be doing the shows on Saturday and Sunday), Clive Hayward was just the right side of bombastic for the role.

Visually, the production is ravishing. The Festival Theatre’s stage is transformed into a sun-soaked, moonlight-drenched, cruise ship thanks to Derek McLane’s set design – complete with cabins, glamorous cabaret stage and a fully stocked bar. You also know you’re in safely gloved hands with Jon Morrell’s gorgeous thirties-style costumes from the moment Reno sparkles into sight. There were some staging issues, perhaps a result of the swift succession of scene changes, which temporarily halted the show partway through the second act, but cast and crew sailed on with aplomb when it was fixed.

The production opened at the Barbican in London last year and is now fizzing its way through theatres around the UK. Slightly downsized – and ever so slightly squished when the whole cast are shimmying their way through a shoe-shuffle on deck – it’s nevertheless a cracking show with a cast that’s as effervescent as you’d hope. A glorious band sidles through Porter’s score wonderfully. And the silly story is told with a sweet sincerity that might just steal your heart.