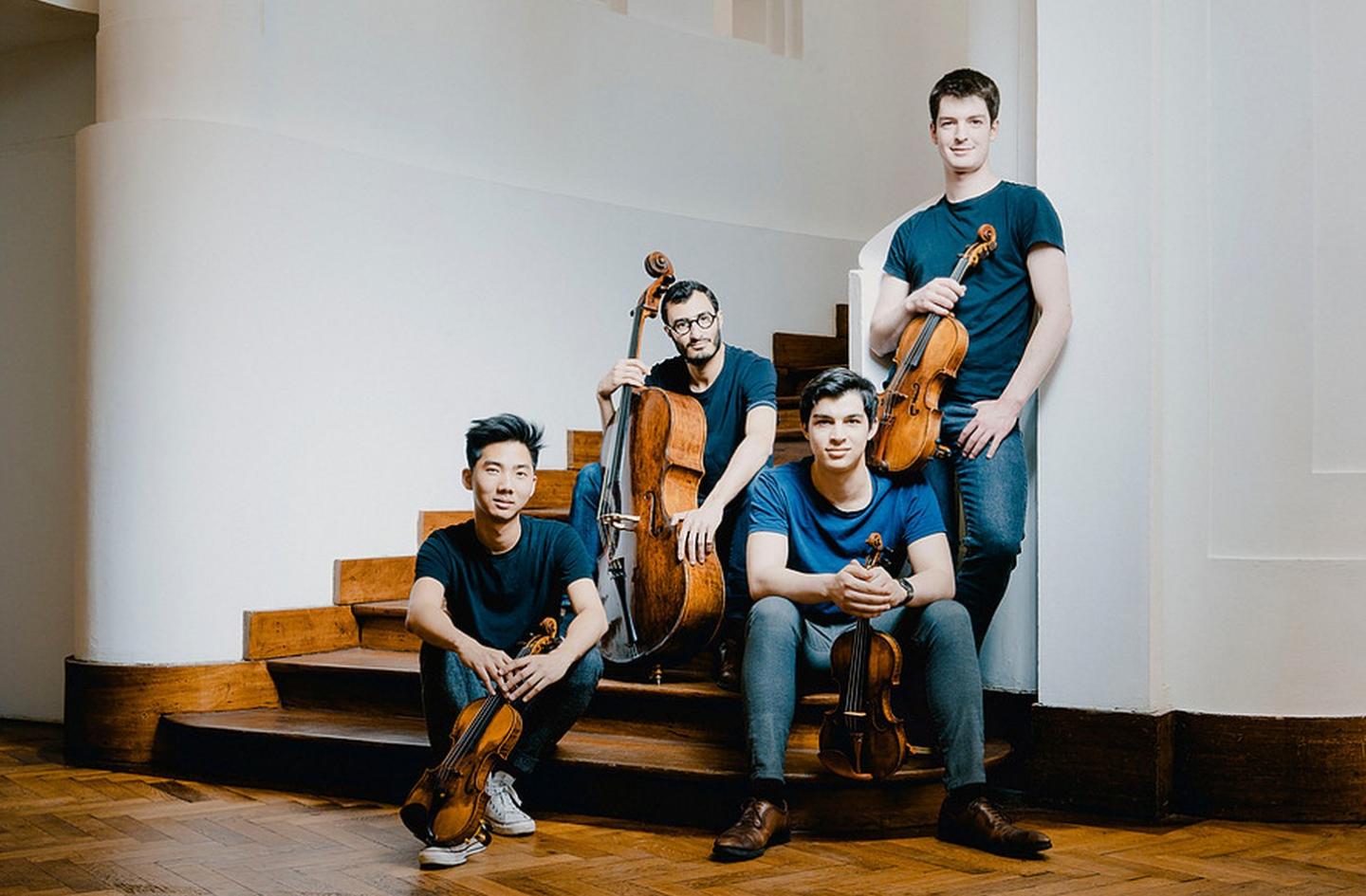 Destined to be big stars of the chamber music scene.

The Arod Quartet, who are based in Paris, are very young: all four musicians are in their early twenties, but their concert tonight is a revelation. They play with pitch perfect precision, in harmony with each other, and with a maturity far beyond their years. Such excellence has resulted in them winning a number of international competitions and securing a record deal with Warner Classics—their first disc, a Mendelssohn Quartet, was released in 2017. Since then, they have been playing internationally at festivals and concerts all across Europe, and they are just about to undertake their first American tour. There is a good audience in the Queen’s Hall tonight for this delayed concert—it had originally been scheduled for last November, but was postponed .

They open the concert with Haydn’s String Quartet in B flat major, Op. 76 No. 4. This is commonly known as the ‘Sunrise’ because it opens with an ascending violin solo against the shimmering strings of the other players to represent the sun rising in the morning. This was amongst the last of Haydn’s sixty-eight string quartets and it is acknowledged to be one of his finest, displaying his mastery of the musical form while being youthful in its experimentation: it is a perfect work to open the concert. The Arod really impress with their interpretation of the work, from its sunny opening, through the deep introspection of the Adagio, followed by the fun of the Menuetto (almost suggesting a country dance), and finishing with the sublime Finale. It is a perfect quartet.

The concert continues with an unusual, rarely performed work: Webern’s Langsamersatz. We tend to associate Webern with abstract atonal works, rather like his teacher Schoenberg, but like his teacher he had an earlier romantic period, and this work is his most romantic of all. Written in 1905 when he was only 21 (and in love with his cousin who later became his wife), it was inspired by a hike in the country he and his cousin took together. At thirteen minutes long, it is a lovely, melodic romantic poem to his wife to be. and it is beautifully played by the Arod.

The concert concludes, after the interval, with Brahms’s String Quartet in A minor Op. 51 No. 2, which appears to have been written over an eight year period. Brahms was a perfectionist—he reputedly composed more than twenty string quartets but in the end only published three. Brahms was encouraged to compose the quartets by the great violinist Joseph Joachim, but he had to wait a long time to get them. However, in tribute to Joachim, the first movement is dominated by the notes F-A-E: a reference to Joachim’s personal motto, “Frei aber einsam” (free but lonely), and it is a very melancholic movement. The Andante is lighter with some very lovely long melodies but the angst comes back towards the end, before the Finale. Again, the Arod are perfect in their interpretation, and they get a warm reception from the Queen’s Hall audience, who leave convinced that this young quartet are destined to be big stars of the chamber music scene.