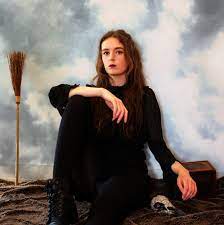 Fringe shows don’t need big stages and technical wizardry to feel important. Often an affecting, deeply personal story is all it takes. Such is the case with Ava Beaux’s latest show Which Witch, featuring the socially acceptable but somewhat troubled Ava and her more eccentric other half Beaux, whose voice has seemingly been stolen. What initially seems like a representation of split personality is in fact a bit more complicated (and magical) than that.

Beaux is a gifted performer, with an alluring stage presence that makes us pay extra attention to every gag, trick, and turn of pace. Her magic acts, while fairly straightforward, are impressive and crucially do not give the game away regarding how she does them. Some of the more comedic moments struggle to gain lift off, with the interlacing of Beaux’s personal experiences with humour leaving us unsure whether to laugh or not. Similarly, when alter ego Beaux’s powers of communication break down slightly, Which Witch loses its momentum. However, these are issues of execution rather than ability and Beaux’s experimental approach to a semi-autobiographical variety act hits more often than it misses.

Beaux’s show makes uncanny use of voiceover both to move the story along and to bring out the turmoil inside her own mind, to disorientating effect. The highlight, however, is saved until the end – a story told with light boxes and silhouettes that answers every remaining question and closes the show out in splendid fashion. It complements the show’s emotional edge, bringing out the best of Beaux as her understanding of her own life is intertwined with the traditional thrills and applause of onstage magic.

Which Witch manages to speak volumes about the way we protect ourselves from harsh realities with mysticism and wonder, but in doing so we may forget to give ourselves the love and respect we need to thrive. It is clearly such a passion project for Beaux, who reveals that she has given up her full-time administration job to focus squarely on comedy. With material like this, with further potential to improve and find bigger audiences to share her story with, it feels like an inspired choice.