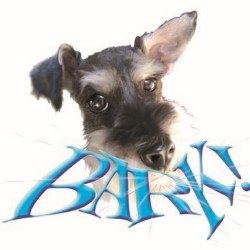 BARK! The Musical…How the little Dog Found His Voice

Catchy music and strong performances abound in this canine-themed show.

A cacophony of barking opens this slightly off-the-wall musical which tells the tale of a Jack Russell puppy – Rockmaninoff  – (Rocks to his friends), who has yet to learn to bark. Heading to the local park, Rocks meets a group of canine friends who help him in his quest. These chums are all different sizes and breeds, and clever costumes and casting portrays this very well.  The group includes an Afghan hound with her long lustrous blonde locks, a scruffy and spiky-haired mutt and a small, compact pug.

BARK! is performed by a troupe of professional actors, in a performance which is frankly of West-End standard. There are several rousing choruses and each actor has the chance to perform a solo. These vary in style, from King’s soulful and poignant ballad, to Chanel’s wildly operatic aria (most impressively performed by Emily Chesterton) and with a nod to Puccini amongst others.

The very catchy and varied musical score has been composed by David Troy Francis who is also the musical director of the show and it’s no surprise that Francis has taken BARK! throughout the United States to great acclaim.  Most of the songs have an explicitly canine theme including “Whizzin’ on stuff” and “I’m in Love with Lassie” to name a couple, but the musical’s central theme of growing up and fitting in, is universal.  Whilst the story is fairly light, with a lack of action and dramatic tension that one might find in other musicals, the singing and dancing carries it through and Francesca Goodridge deserves a nod for strong direction and choreography.

With a performance time of 85 minutes , it’s a little long for smaller children and perhaps could have benefited from an interval, but this is nit-picking. BARK! is worthy of a visit even if just for the great music, performances and the sight of  Sam (Andrew Doyle) in a pair of gold sequined underpants