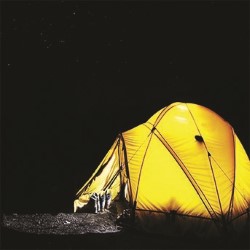 A contrasting experience in a tale of two tents.

Immersive theatre doesn’t get much more immersive than BaseCamp, one of the latest offerings from Fever Dream Theatre.  BaseCamp is a play, nominally about climbing, performed within two externally-pitched tents, with viewers sitting Bedouin-style on ground cushions.

On arrival, the audience is split into two (couples and those in groups are separated), with each half following one of two unnamed, female, rucksack-clad climbers into their respective tent. There is some obvious unresolved tension between this pair and their behaviour is markedly different. One is upbeat, verbose and enthusiastic, in contrast with her more laconic and morose partner. This unnamed duo have been partners/ rivals all their lives, and are about to embark upon a challenging mountain ascent.

It’s clear from the outset that this is effectively a performance of two related, but subtly different, plays; leading the viewer to wonder what’s being said on the other side of the camp. Each climber chatters to her assembled audience, a monologue discussing both the relationship with her rival in the fellow tent and some recent dramatic events. These soliloquies are performed well, but at times feel slightly unnatural, given their length and the lack of audience participation in the conversation. A link with the ‘other’ tent is maintained with occasional bursts from a walkie-talkie and at one point, an intrusion, but the interaction between the two actors is fairly limited.  The action is reported, rather than experienced first-hand.

By using this interesting two-tent device, writer Jonathon Carr is seeking to show how individuals can reach drastically differing conclusions from the same course of events. It’s a clever concept, but in order to work effectively, the denouement relies on some post play discussion between the occupants of each tent.  The experience would be somewhat diminished for a solo playgoer who has only experienced one side of the story.

Nevertheless, BaseCamp offers a very different, unconventional and thought-provoking theatrical experience. This is what the Edinburgh Fringe is all about.