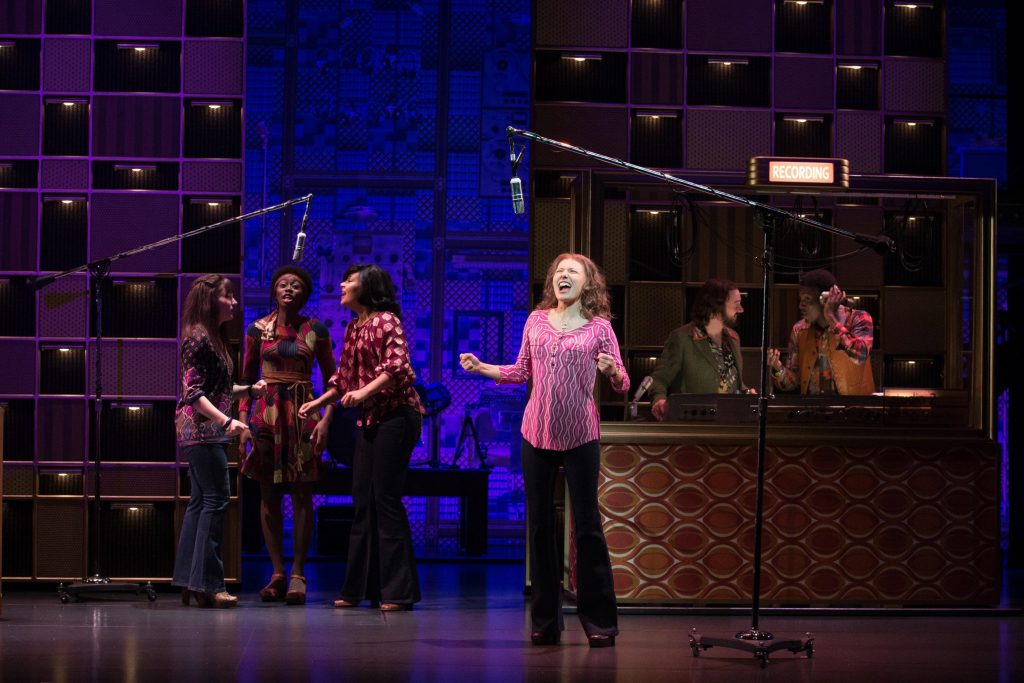 Carole King (nee Klein) – she was magnificently played on Edinburgh’s press night by Leigh Lothian – came of age just as the teen anthems of pop were coming into their own in the early- to mid-1960s. This musical traces her story from playing the piano in her mother’s Brooklyn living room to the hothouse of New York’s Brill Building where she teamed up with Gerry Goffin (Kane Oliver Parry) and where they were buddies with fellow composers Cynthia Weil (Amy Ellen Richardson) and Barry Mann (Matthew Gonsalves).

King, in the musical, is as relentlessly optimistic as the songs: “sometimes when you don’t find what you are looking for you find something beautiful,” she says. Her’s was a prodigious talent – she wrote the yearning It Might as Well Rain Until September when she was only 16. Neil Sedaka wrote Oh, Carol for her. And her and Goffin’s catchy Will You Still Love Me Tomorrow? was a paean to lost virginity. King moved with the times, creating hits for the Drifters, the Everly Brothers, the Byrds and Gladys Knight, not forgetting the unforgettable hymn to friendship You’ve Got A Friend. She finally became a 1970s singer songwriter in her own right with her bestselling California-infused album Tapestry of 1971.

Beautiful tells the backstage story freshly and with vigour. There’s no slack here – ultra-speedy scene changes take the audience from the domestic to the studio to the TV station as King’s compositions transform from conception to performance. All this comes over well, the performers giving the pop tunes greater depth and earthy resonance than even King might have imagined.

The singing is excellent and it’s a well-paced show thanks to director Ed Goggin. And the hits keep coming, perfectly reflecting the story and changing times as King struggles with marriage, children, infidelity and her evolving career/creativity. There is a delightful and very real undertow of sadness to the story that contrasts with the relentlessly catchy teenage anthems; a perfect evocation of mid-century Tin Pan Alley. There’s also some great choreography that captures the syncopated dance routines (Suzanne Thomas) of the boy- and girl-groups of the era. This is a terrific show offering faultless singing from the four leads and some wonderful set pieces. A beaut of a show!