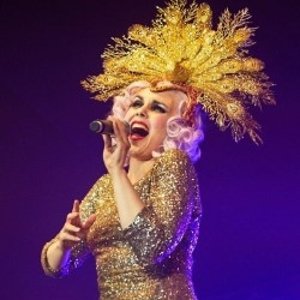 Lacks the drama and atmosphere of its bigger cabaret siblings, but Best of Cabaret has fun, thrills and passion

A capable, slick and enjoyable hour of cabaret

The sister performance of established Fringe favourite Best of Burlesque, Best of Cabaret does exactly what it says on the tin. The Royals are back offering a taste of the best variety entertainers out there in the Fringe this year. What it lacks in scale and grandeur, especially compared to the big top revelry of its compatriot Fringe shows, it can make up for with humour and a lavish appeal.

A rotating cast means that Best of Cabaret has something new to offer every night. As such, its success hinges very much on its chosen performers and their ability to get a rise out of the crowd. Some inevitably do a better job than others, while at times it feels like the stars only get to offer a glimpse of what they are capable of with such a tight schedule to stick to. That being said, every one of them still manages to have some fun and bring vintage variety entertainment to life (right from the opening act, which is about as old-school cabaret as it comes).

Some of the acts do exactly what they need to do and more, with one ‘physical’ musical comedy act leaving the crowd in utter hysterics – laughing as much at a very willing audience participant as they are at the performer themselves. The other acts elicit a mix of laughter and admiration, the highlight probably being a multi-hula hoop extravaganza that feels like it is lifting the lid off the whole venue (all the acts also demonstrate impeccable timing, be it musical or comical). It is all brought together by an eloquent host who embodies the best of the glitz, and glamour of the cabaret spirit.

Best of Cabaret feels like a much shorter show than it really is, with everything whizzing past you faster than you might like. It leaves you pining for more, which is perhaps the point; you may well want to do it all again the following night. This is a capable, slick and enjoyable hour of cabaret that would be elevated even further by the scale and extravagance afforded to its fellow variety offerings.