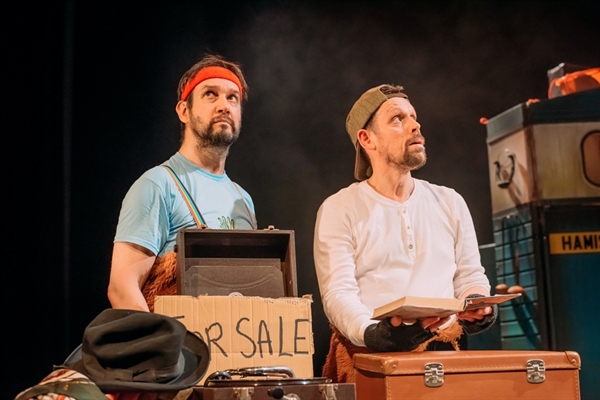 Intertextual mischief with a classic puts the rest out to pasture

Hits every mark you weren't even aware of

The lives of a panto horse duo are hard ones. Edinburgh’s King’s Theatre and Glasgow’s Pavilion are searching for a cow over a horse (how rude!), and the McCuddy brothers, Andy and (wee) Andy, are struggling to make ends meet as they search for a gig. Starving, out of work and with their horse box now stationed on a roundabout, these boys are by no means having a good day… What do you mean this doesn’t sound like Black Beauty?

In lesser hands, this inventive concept could have been an utter shambles. Instead, impeccable writing from our two Andys (Manley and Cannon) and Shona Reppe‘s design transfix the audience and holds our eyes and ears. They reimagine the text, wrapping it inside a touching story with excellent performances. It’s much more than a simple re-telling. As the boys seek to sell their possessions to make money, they stumble upon their mother’s copy of the titular Black Beauty. Taking ludicrous household objects and somehow investing a huge amount of emotion into them, they bring the novel to life. Who’d have guessed a wellie could provide such pathos?

Black Beauty is a home brew for The Traverse; its language and comedy is unabashedly Scottish, with local humour which appeals to the home crowd, but a broad enough spectrum of gags and storytelling that allows enjoyment from any distance. What’s truly marvellous is how Manley, Cannon and Reppe weave together a panto, without it actually being a panto. How telling of Scottish tradition that turning the formula for a pantomime on its head can create something which circles straight back into that familiar territory. Subtle looks, line deliveries and lighting cues cause the audience to clap in time and hiss at an imaginary antagonist.

Red Bridge Arts put a sublime level of effort into this production. What could have been a simplistic Christmas show is instead a well-crafted intertext of Black Beauty. From simple puns inside the bookmark programmes, musical cues from Champion the Wonder Horse, and even equestrian themed ice creams (don’t ask!), together The Traverse and these equine illusionists hit every mark you weren’t even aware of.