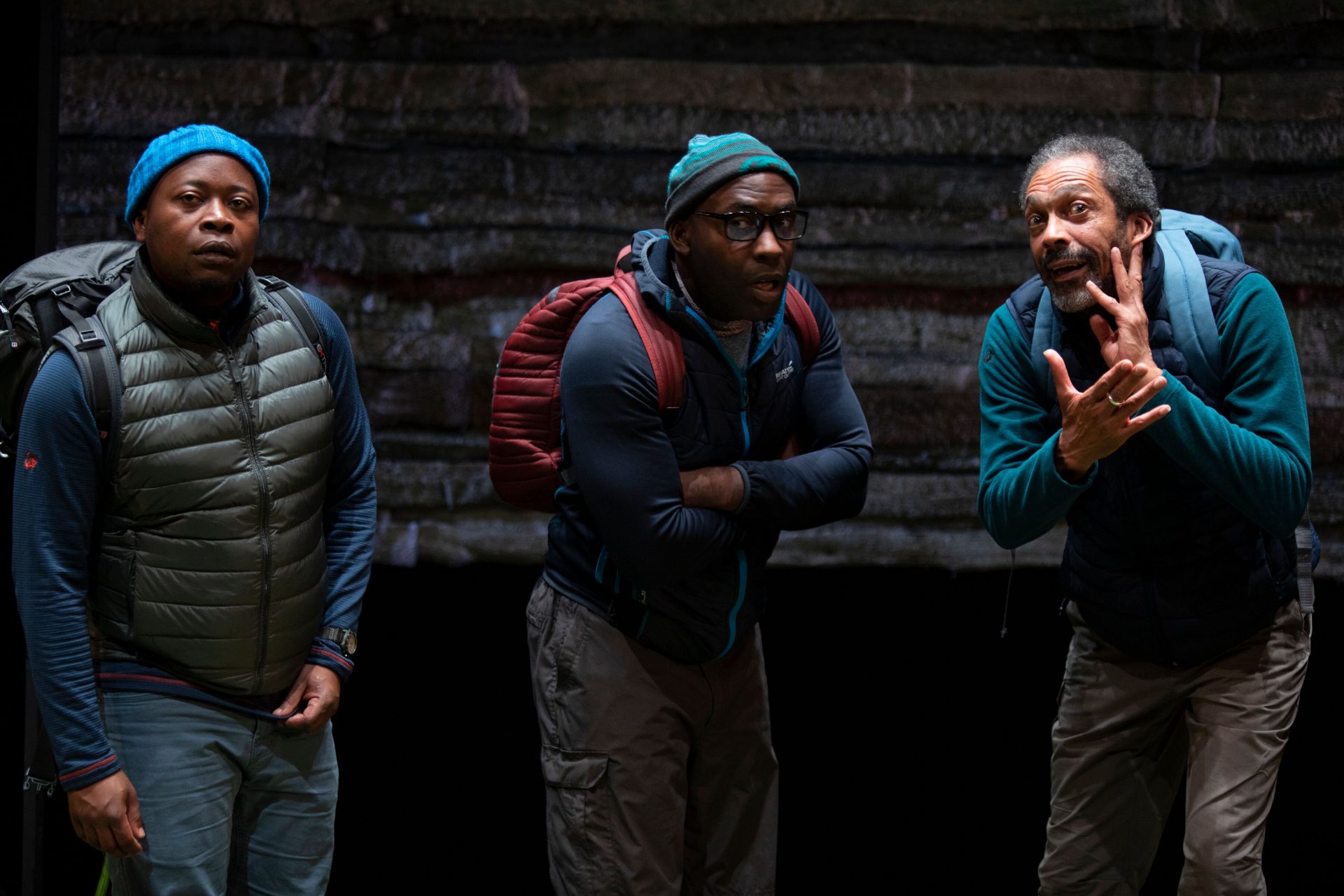 Thomas, Matthew and Richard walk once a month on a Saturday. This month, they escape into the Peak District, ribbing each other, exchanging updates on the latest events in their lives, and reminiscing about other walks on other days – until the weather takes a turn for the worse.

These events lead to what is a fascinating piece of writing. Testament is a rapper, composer and beatboxer as well as a writer for theatre. Black Men Walking blends performance poetry, a verbal vocal score that creates its own music and prose in a rich soundscape that envelopes the audience. The prose unfolds into the story of a happily devoted Star Trek (New Generation) fan, a doctor who’s doing a less good job of healing his own relationship, and a devoted walker who’s great at orienteering but has lost his way in life.

Ben Onwukwe (Thomas), last seen on stage in Edinburgh as the majestic Aslan in the Lyceum‘s The Lion, The Witch and The Wardrobe in 2015, continues majestically as the man compelled by his history to wander the Peaks. His quest for meaning is nicely sharpened when he almost loses everything – and his fascination with the past provides a handy fabric for this writer’s exploration of origin.

Patrick Regis as Matthew, stoically dealing with his heartbreak as his relationship collapses, is sweetly sympathetic whereas Richard (Tonderai Munyevu) is the chocolate-pushing joker of the group. With Matthew hailing from Jamaica, Richard from the African sub-continent and Thomas born and bred in Yorkshire, we’re served some considered discussions about the nature of nationality, identity and what it really means to be black.

Ayeesha (Dorcas Sebuyange) is a lovely antidote to their sometimes ponderous musings. Fizzing with energy despite wandering astray in the hills, she speaks of growing up black in modern-day Britain and seems no freer from the weight of lowered expectations than the older men. She delivers the performance poetry with vigour, passionate sincerity and a compelling panache.

Despite polished direction from Dawn Walton and a visually intriguing set by Simon Kenny, the worthy endeavour of contrasting centuries of black history in Britain with alive and thriving contemporary racism results in a script heavy with meaning but rather lighter when it comes to the narrative.  The mystical forays are sporadic enough to leave the impression of a show not quite sure of its own identity.

That said, Black Men Walking a bold attempt to tussle with an issue that’s far from easy in these turbulent times. The show premiered last year at the Royal Exchange Theatre in Manchester. Following a successful tour, Eclipse Theatre Company have revived the production this year. Having already been to the Tron in Glasgow earlier this month, the group are set to continue their travels – first in Perth and later Greenock. The experiment with theatrical form and the beautifully lyrical language makes for an interesting and thought-provoking night out.