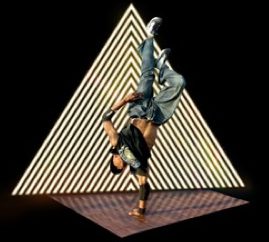 Is hip hop a way of life or another trend like all the others? It’s difficult to tell nowadays when urban culture has spread out into the suburbs and everyone wants to be able to spin on their head (come on, admit it). Blaze clutches onto this trend and uses it to create something familiar and yet altogether different.

Fifteen dancers from around the world come together on one stage with a toe tapping soundtrack and a set and lighting design (Es Devlin) that will capture your imagination. The five choreographers (Lyle Beniga, Mike Song, Ryan Chappell, Kenny Wormald and Chris Baldock) depict the essence of modern hip hop with some older styles thrown in. The show demonstrates just how theatrical the genre can be and with comedy sketches, group routines and a dance circle at the end for individual tricks, the dancers are pushed to their limits.

The production begins with a line of shoes which the dancers put on before a giant clothes line rises above the stage. This demonstrates that hip hop is, contrary to some beliefs, not about how you look but about what you do. As the show progresses there are some breathtaking visuals and spectacular moments of dance including the tapping trio and the BBoys ridiculously mad skills that had a few audience members’ jaws nearly hitting the floor. Despite the fact all the dancers were clearly individuals and some group numbers didn’t seem particularly tight, the energy was constantly high and the choreography and execution was, on a whole, top class. Blaze shows us what hip hop can be; something comedic, entertaining, serious and contemporary all thrown into one show. But for those out there who believe urban culture is all about the attitude, maybe it’s time to take a step back and look at what it has become: something that transcends gender or race and can bring people together in a positive way. Blaze not only does this but helps you to leave with a smile and some moves to try out on the kitchen floor.