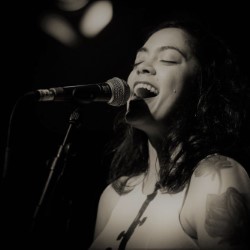 Blueswater Presents: Queens of the Blues

An anthology of legendary Blues Queens

Blueswater Presents: Queens of the Blues offers an irrepressible, anecdotal anthology of the legendary women who have shaped the blues genre over the years. From cultural icons such as Nina Simone and Etta James to lesser-known virtuosos such as barefoot, back-flipping Sugar Pie, this show will appeal to both blues fans and novices alike. With simple lighting and adornment only in the form of black-and-white portraits of the Queens themselves arrayed on a back wall, the focus throughout is entirely on lead singer and Edinburgh veteran Nicole Smit. No other staging is needed as, from the first note to the last and racing through the emotional spectrum, the audience is captivated by Smit’s fantastic vocals.

It is perhaps inevitable that a show such as this one – joyously celebrating the trials, tribulations and fortunes of the best female singers of the blues genre – should have a feminist expectation. Nicole Smit, in her brief introduction, wryly addresses the question straight on by saying that the treatment of women in the music industry is well-known and that the show will strive to focus on the music.

Nevertheless, each song is contextualised with a few broad strokes from the personal lives of the singers referenced that will have you itching to find out more about their careers and impact. One of the stand-out pieces is a rousing rendition of Jericho, originally performed by Sister Rosetta Tharpe. Sister Rosetta, we are told, was a formidable guitar player and crucial precursor to rock’n’roll, influencing Elvis Presley among countless others.

Another highlight, heart-wrenchingly sung by Smit and featuring superb guitar solos from the band, is a performance of Ball ’n’ Chain. Though the cover by Janis Joplin is more well-known, the song was actually recorded much earlier by singer Willie Mae ‘Big Mama’ Thornton, an individualistic performer who often dressed like a man and was openly gay. These brief snatches of blues folklore bring a vibrancy and affection to the show that elevate it to a higher level and, yes, it ends up feeling feminist in the best way: a historical exploration of real women and the real things they created.

Whether you are looking to hear an uncommonly talented vocalist, lose yourself in stunning guitar solos or learn just how much you don’t know about the Queens of the Blues, this show is the place to go.