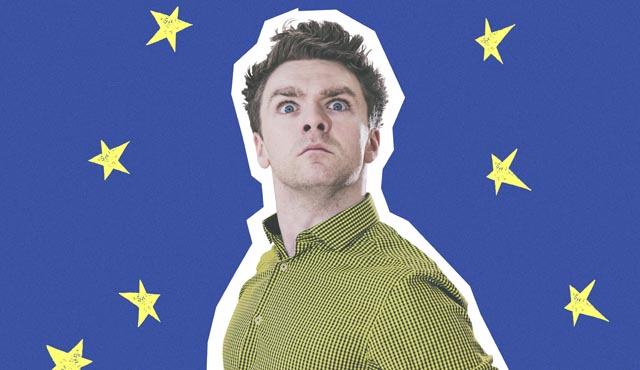 Fionn Foley puts in a fun one man performance

Fionn Foley harnesses the charm of small town Ireland life, and infuses the ridiculousness of Eurovision to perform his highly enjoyable one-man show, Brendan Galileo for Europe. Although the story feels a bit familiar to fans of coming-of-age 1980s movies that feature a dated, but well cherished property threatened by property development, the hour long performance feels distinctive enough to enjoy.

The story revolves around Brendan Galileo, a young man with gumption for political change who bombs out of a by-election. Galileo decides to run for the European Parliament, but realises his exposure to the electorate needs to grow. He then decides to make a splash by serving as the Irish performer at this year’s Eurovision competition. Through a hilariously ridiculous process, he easily becomes the representative and enters the competition.

During his performance, the audience observes not only Foley’s strong ability to act as different characters in the story,  but also his ability to edit the distinctive sounds that accompany the show. These provide well-timed backing to the performance, and help to keep the observers immersed in the world. Foley slips in and out of characters, sometimes with mannerisms that are a bit over-the-top but always consistent, which further helps to develop his story.

The show builds at a fine pace, bringing along the audience with an endearing performance. Foley also incorporates the cynical nature of modern nationalism within Europe, and how this bleeds into Eurovision. These more serious themes mesh well with the comical nature of the wider performance, and culminate in a final scene that brings the hour to a tremendous conclusion.