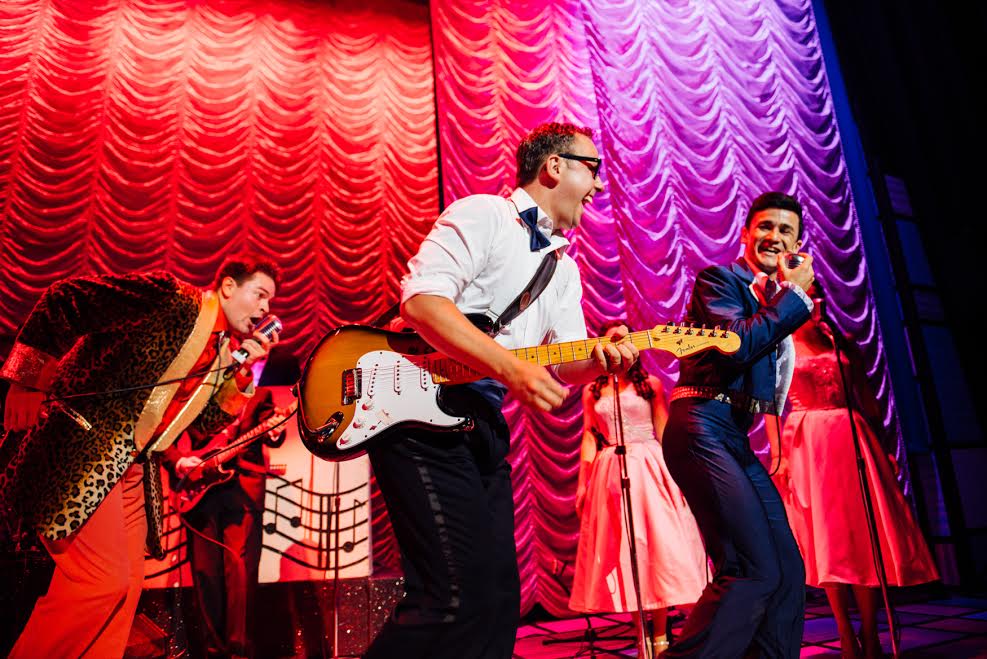 The Day The Music Died remains a devastatingly sad chapter of music history, but Buddy, the 1989 musical about the career that was so brutally ended that night, keeps the mourning to a minimum in favour of a fun celebration of rock ‘n’ roll in its infancy.

We now sit almost as distant from the original musical as it was from the era it portrays, and time has turned the book stale. It might be “the world’s most successful rock ‘n’ roll musical”, but the twin overfamiliarities of jukebox musicals and rock biopics have reduced its story threads to cliche. It’s all shyster managers and wide-eyed teens and “but sir, we just wanna rock ‘n’ roll!!!”. It could use some freshening up.

Not so the music, which, though twice as old, remains evergreen. Songs poured out of Holly. In eighteen months, not only did he set the rock ‘n’ roll template that Lennon & McCartney would later follow, but created a songbook as lush as Cole Porter or Bacharach and David. There can be few pop songs as pristine as It Doesn’t Matter Any More, few slow dances as gorgeous as True Love Ways.

It is hard now, though, to fully appreciate the seismic shock of rock ‘n’ roll to a country music scene. Buddy doesn’t make it any easier, relying on the anger of a record industry type who just doesn’t get what the kids want, man.

It’s even harder to believe Buddy and his band were ever mistaken for a black act, given how obvious it is to modern ears this is a nerdy looking white kid. But legend has it that this was the case when they were booked to appear before a “coloured” audience at the Apollo Theatre, Harlem, and stormed it.

These racial undercurrents give the show its edge, and stop it being a pure feelgood “rise to fame” story. The transition of the Texan teenager from country troubadour to rock ‘n’ roller was not just one of sound, but of culture, with all the the tensions that implied. Equally important in this regard is Holly’s lightning romance (five hours from meeting to engagement!) with Puerto Rican Maria Elena (Kerry Low). The disdain shown by his family and record label staff toward her is barely concealed. One suspects it wasn’t just to keep Holly’s female fans sweet that she was sidelined.

The second half places us in the Surf Ballroom, Clear Lake, Iowa the night before the fatal plane crash. Disbelief is suitably suspended by means of loud ballroom MC (the larger-than-life Matthew Quinn) warming up the audience. The music he then introduces gets progressively more rocking, starting sweetly with some close harmony singing (which has been gorgeous throughout), and finishing with a barnstorming ensemble version of Johnny B Goode. In between, we get to see exactly why Ritchie Valens was lock-up-your-daughters level shocking thanks to some implausible hip-swinging from Jordan Cunningham, and the Big Bopper (Thomas Mitchells) shows off an even bigger personality.

But it’s left to our main man Buddy (Glen Joseph) to bring the house down. He ends with some flat-to-the-floor riffing, air-kicking his way into musical history. Joseph has announced this will be his last tour, but with performances like this, his final dates should be happy ones.

So while Buddy feels dramatically quite flat, what rightly wins out is the music. It’s enough to send audiences home searching out Holly on their streaming service of choice, his talent having outlasted even physical formats he never lived to see.