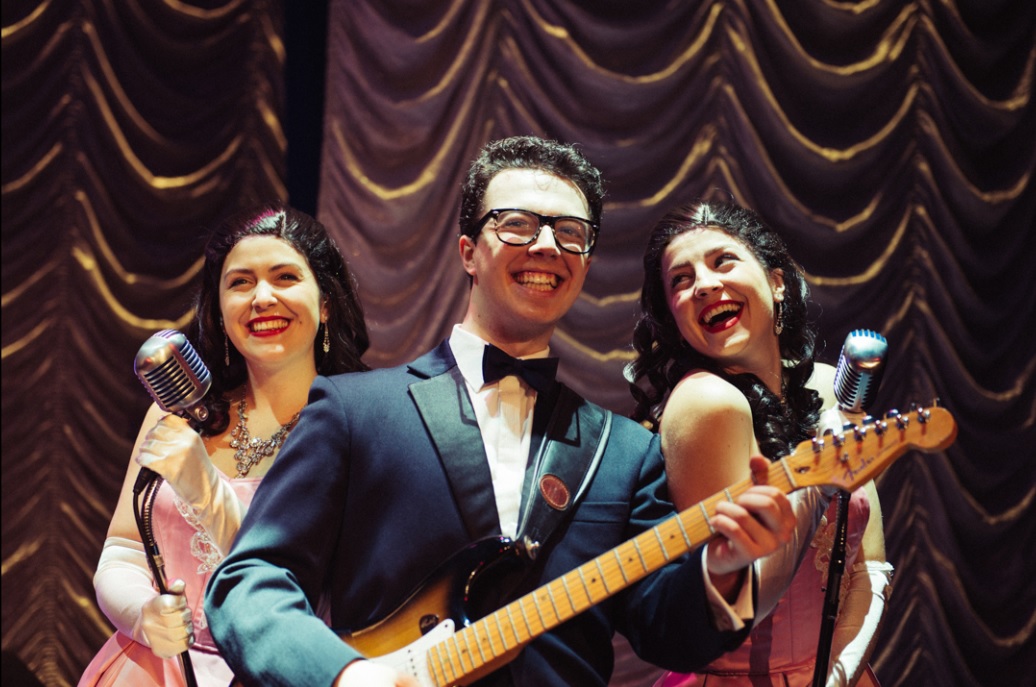 A Rock n Roll musical, sure to keep you bopping to the very end!

Buddy – The Buddy Holly Story, is a non-stop, toe-tapping tribute to one of the 50s most well-known performers! Buddy Holly’s short but historical career is celebrated in a collection of his songs from the three years which saw him rise to fame, and then meet a very untimely end.

From the moment the curtain rises, the audience are thrown right into the life and sounds of Buddy Holly and Crickets. The tale is told through radio interviews, recording studios and live stage performances sharing the wide repertoire of records. The mix of well-known catchy tunes, mainly Buddy classics but also others of the era, carry the show and keep the audience engrossed until the very end; however the cast stand out of their own accord with numerous, individual character quirks. Harry Boyd’s clever switch between key characters in the group’s journey is simply carried off by a new hat, jacket and change in accent. Sitting in the audience, you feel a part of something that every cast member cares a great deal about.

This feeling is only deepened when at the end of the show, Christopher Weeks lifts his glasses from his face and shares a tribute created by the full team. They perform Don McLean’s American Pie to commemorate the death of Buddy Holly exactly 61 years to the day. It is a touching addition, not a standard part of the show, to what is already an incredible performance.

Quite possibly the most impressive aspect of this show is that there is no separate orchestra; instead it is the talented and impressive cast who bring the music. They sing, dance, act, and play a multitude of instruments with immense talent. So much so that when the story takes you to the two most historical shows of Buddy’s career – The Apollo Theatre and The Winter Dance Party – you actually feel like you are there, enjoying the show for the first time with Buddy Holly live on stage. The imaginative use of curtains and simple lighting movements on set transport you from the theatre audience to being a part of the show, without you even realising.

Throughout the performance your body moves with the music and you are lifted into a different era. The original story is extremely moving, but there is a feeling of gratuity by the end that keeps you involved until the very last moment. Go and take yourself back to the 1950s and find yourself immersed in rock and roll!