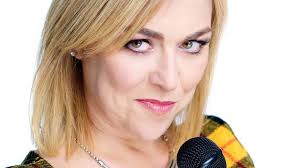 Drury Street’s Yesbar basement is full on the first Saturday night of 2017’s Glasgow International Comedy Festival for Hebridean comic Carina MacLeod. As the show’s title – 44 – and accompanying mock-Adele-album-cover poster suggest, the observational comedy set takes us through Macleod’s perspectives as she’s matured, but first begins with her childhood memories from the Isle of Lewis. Some of the jokes might be a little based in cliché (men & sheep etc.) but MacLeod’s gusto pulls them off, sharing quick anecdotes of failed exams, finding sticks and cow-mooing competitions.

From the Hebrides, we zoom forward to current home, Finnieston, one of the ‘trendiest’ new places to live in Europe, apparently – according to a stranger MacLeod met at the airport, at least. She derides the area’s pretentious restaurants with comical quips and reels in the audience with her descriptions of the local clientele.

Gregarious MacLeod abandons a chronological autobiography-style structure, though, and dips in and out of social media ponderings. While some of the material feels like we’ve heard it before – ridicule of dinner pics and baby-posting parents – other ideas are more original, like her imaginings of what her own Facebook posts might have been at fourteen, complete with fun hashtags that earn a giggle.

The sense of wavering originality continues throughout: the engaging mockery of new and ridiculous greetings card occasions vs. over-forty women sneezing and peeing gags. However, pulling the audience back in after the pace lags a little in the middle, MacLeod’s third-act piece on her own entrepreneurial idea for a greetings card niche is cleverly crafted with some hilarious punchline rhymes. Even this idea never seems to fully climax, though, as time-filling and patchy audience interaction takes over for the final ten minutes.

MacLeod’s lively but uneven routine loses stride at times, but generally keeps the audience entertained – perhaps not always easy at 10pm, or what the comic refers to as ‘The Roasting Hour’.