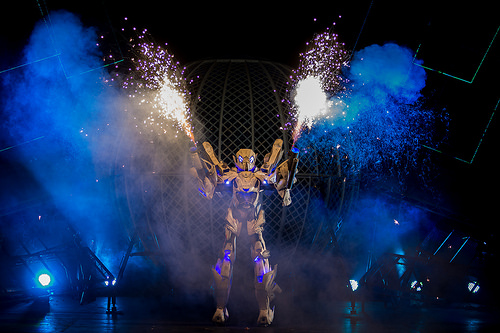 An eclectic mix of aerial acrobatics, motorbike madness, and comical clowning serves up an entertaining evening at the Festival Theatre in Edinburgh. Cirque Berserk! is a contemporary take on the traditional circus format and Martin Burton (Founder and Company Director) and Julius Green (Creative Director) have now brought their circus acts to the stage.

The show opens to an unusual theatre message – audience members are actively encouraged to keep their phones on and tweet, message and picture the show to their hearts’ content – giving a curious edge to the show from the get-go.

Then to the acts. The Timbuktu Tumblers provide transition points throughout the show with their acrobatic and limbo skills, Jose and Gaby from Columbia provide grace and elegance in spades and the duo Bolas Argentinas take multi-tasking to a whole new level with weapon throwing, juggling and fire involved in their impressive performances.

There is an international feel to the show but Scotland is not underrepresented as Alan Digweed (aka Tweedy the Clown) provides intermittent moments of slapstick humour, the highlight of which is when two unsuspecting members of the public are cajoled onto the stage to help him with his unicycling act.

The pièce de résistance of the night, however, is The Motorcycle Globe of Death performed at high speed by the Lucius Team. One, two, three and finally four motorbikes enter the spherical arena where they bike round in seemingly impossible synchronicity in a confined space. The audience hold their breath the whole way round.

It is quite a show, with contortionists, knife throwing, aerial artistes and catapulting gymnasts completing the line-up, but why is there a robot? And what is the purpose of the four dancers? They certainly add nothing to the show which at times becomes repetitive and lacks a flow.

Despite this Cirque Berserk! is an exciting format and one which will pull in crowds, but it could do more as it develops the circus Big Top spectacle for the theatre stage.