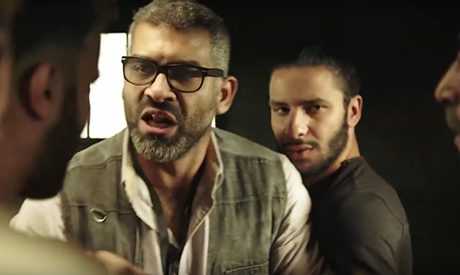 Explosive and experiential: enter a war-zone with this thriller.

While cinema may be used as a form of escapism from the horrific social and political injustices in the world, Clash does anything but; violently hurling the viewer into the back of a police van amidst the Egyptian revolution of 2013. Shot from a first person perspective, the viewer unwittingly becomes involved in the lethal drama as politically-polar citizens are added to the van and devastating scenarios ignite.

Unfortunately, the mention of first person thrillers may recall the insubstantial ventures of Paranormal Activity or Cloverfield, whose shoddy camerawork renders the viewer nauseous. Thankfully however, Clash rejuvenates this approach and its camerawork is actually to be commended. The entirety of the film is staged solely in the back of an 8m police van, and as such witnessing the exterior conflict from an interior setting is disorientating but well-crafted. Tensions and internal conflict escalates within the van, successfully eluding to the war-torn city on the outside. Subsequently the film becomes something of an advanced theatre performance – mirroring past cinematic triumphs such as Tarantino’s Reservoir Dogs or Hitchcock’s Rear Window.

As the film progresses, different levels of the human condition are cleverly addressed. Whether battling the external elements, avoiding grievous harm, or attempting to evade their prison, the detainees are forced into a position of communality in adversity. However, due to such potent political hostility, is following man’s primal instinct to form a group too much to ask of the prisoners?

At points one may argue the storyline borders on the contrived, forcing particular plots to allow the film to progress. However, being of a single-set nature, inventing new developing scenarios each time would prove difficult. Otherwise this thriller brilliantly and, most importantly, candidly exhibits modern political venom without the glitzy, Hollywood filter. Addressing very relevant, contemporary topics through basic human principles, and masterfully exploiting the simplicity that cinema can be, Clash is a film that will certainly take the viewer hostage.