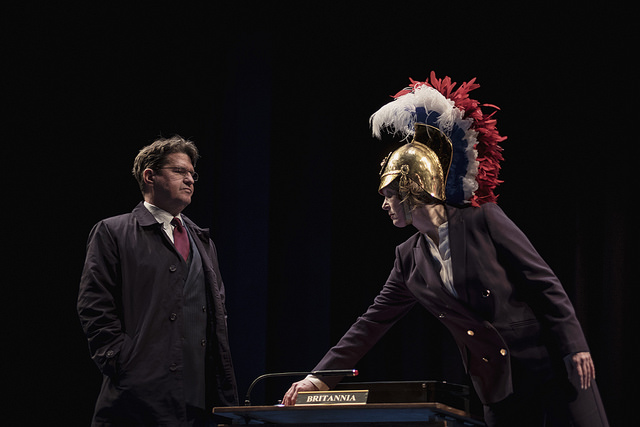 My Country: A Work in Progress

Glasgow is the first stop for The National's poignant, unexpectedly funny examination of Brexit Britain

Poignant portrait of the Brexit debacle

Assembled in the aftermath of the Brexit vote on 23 June 2016, My Country: A Work in Progress is a poignant, admirably balanced verbatim exploration of the societal sh*tstorm the people of the (dis)United Kingdom have been enduring since.

Penned by Poet Laureate Carol Ann Duffy, My Country frames the verbatim words of  real-life interviewees within the narrative of a tense council meeting composed of representatives from six major UK regions all putting across their constituents’ thoughts on the Brexit debacle, presided over by Britannia.

Giving any more time to hand-wringing about the outcome of the European Referendum is a hard-ask of anyone at this point, so the first thing to note about My Country is: it actually does what it says on the tin. Although the regional reps (Seema Bowri, Cavan Clarke, Laura Elphinstone, Adam Ewan, Stuart McQuarrie, and Christian Patterson) might flirt with stereotypes, the real-life people they give voice to actually are a refreshingly balanced cross-section of our conflicted country. Duffy fully employs her poet’s ear to knit the disparate verbatim excerpts into a flowing, emotional and unexpectedly funny narrative while Rufus Norris‘ direction is tight and decisive, the array of the actors across the stage mirroring the psychological twists of the debate.

The excellent cast wring every drop of British self-effacing hilarity out of Duffy’s script, but there needs to be special mention of Penny Layden, ruling over all as weary Britannia. She also has the thankless job of voicing the politicians that pushed the Brexit debate forward and embodies each with vomit-worthy aplomb, garnering some of the biggest laughs.

With the script mostly switching between verbatim dialogue and the snappy interactions of the council members, the more overtly poetic monologues written for Britannia can jar. With everything else feeling so grounded, this classical concept of a country having human form – and even the idea of that old figure of ‘Britannia’ – feels a bit heavy… but perhaps that’s just the ol’ Caledonian independence rearing its head.

It’s heartening to see the National working outside its London epicentre and creating a responsive work that genuinely reflects the Britain of 2017, even on this very particular question. And there are no answers. My Country is – as it says – a work in progress, and the production is a slice of the UK as we find it today: confused, tired, scared and still bloody laughing.