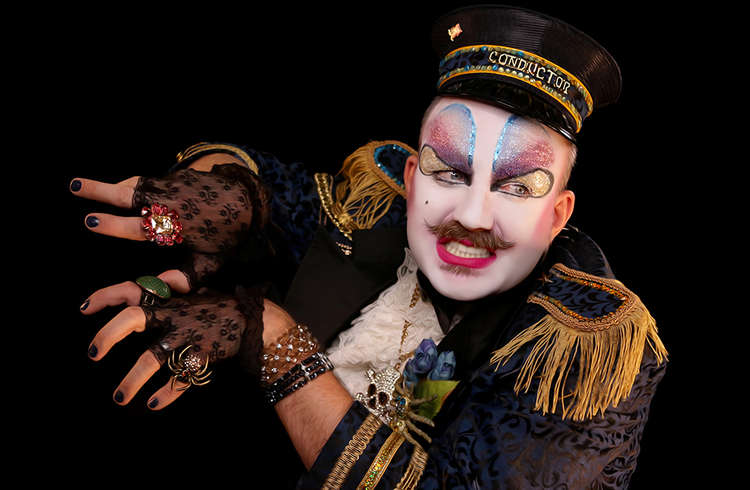 Having previously covered difficult subjects like misogyny, gun laws and mythology (what, you may ask, is difficult about mythology? Just look out for Myth Mouth…) in the form of separate stories under one theme, this year Neil Arthur James aka Dandy Darkly, presents a slightly different arrangement. All Aboard! is a novella of a performance with each individual chapter woven to the whole like a sticky web. We are transported on the nightmarish Gaybird Steamer to the heavily humid, grotesquely visualised town of Gaybird, Georgia, USA, for the stories of little Biscuit and the grown-up Darnel, Colonel Cracker and his offspring, and the capricious folklore deity, Anancy.

This show is chock-full of James’s trademark rapid-fire delivery of alliterative punk poetry, superbly timed to a pre-recorded soundtrack so the audience might well believe the band is live in the small room. James never shies away from the brutality lavished on marginalised people and the sleepwalking stupidity of those literally buying into the fake satisfaction and hidden suppressions of consumerism, from the first prospectors to the modern-day fervour for the latest “must haves”. Critical polemic on the state of America it is, but from the creative behemoth of Dandy Darkly, whose Georgian roots go as deep as a shagbark hickory tree, the characters and tales are delivered with enormous love and affection, albeit a grotesque, carnivalesque vision of family.

Moving from his 2015/16 Free Fringe afternoon slot to this late, ticketed gig at Underbelly Bristo has had a beneficial effect on the audience: tonight’s is hanging on his every word and gesture, no conversations or phone calls as sadly befalls so many gigs. Dandy Darkly once again delivers the Fringe dream of filling a small space with huge, technicolour vision through a cracked mirror; entertaining, shocking and truthful in equal measure. Don’t go to bed without him.

Dandy Darkly will be on a panel with Pussy Riot on Sat 18 Aug at Fringe Central to discuss the role of performance and art in political activism.