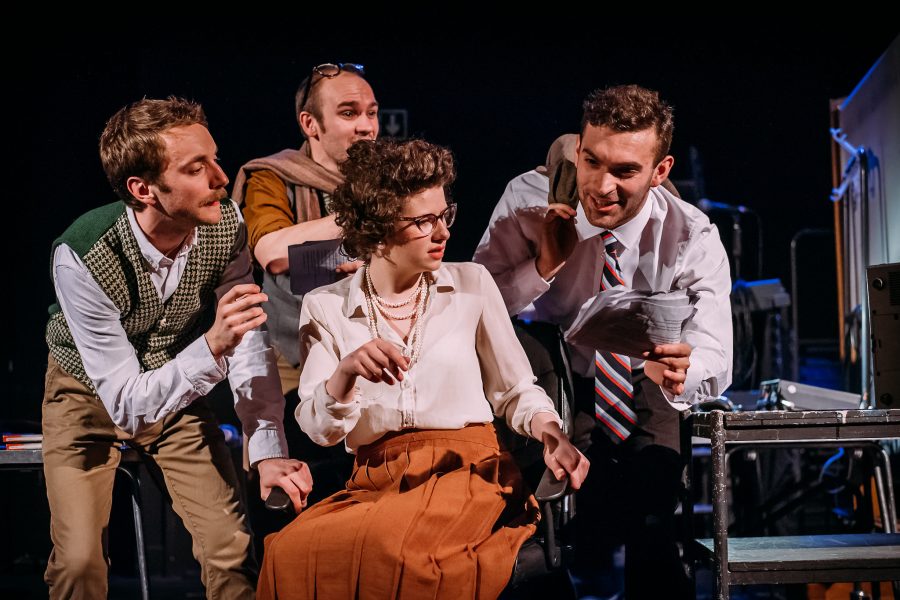 Low on drama, but strong on the philosophy of this electronic music pioneer.

The BBC Radiophonic Workshop, the sound laboratory best known for creating the theme to Doctor Who, has had a posthumous uplift in profile and reputation through retrospectives, reunions and documentaries. Partly this is nostalgia, partly pride that something so bloody British, public-spirited and fuddy-duddy as the BBC produced something so radical. But partly, modern feminism has called our attention to the fact that, against preconceptions, this pioneering lab had women at its core – Delia Derbyshire, arranger of Doctor Who, and the Workshop’s co-founder, first director and tonight’s subject, Daphne Oram.

This Blood of the Young and Tron Theatre production plays as straight, chronological biography, starting with teenage Daphne’s ham radio experiments, surfing on through her BBC days and ending with her later retreat to rural seclusion to experiment full-time. It looks deliciously retro – designer Ana Ines Jabares-Pita has not skimped on detail – and its light comic moments steer it close to period parody. That’s not to say the play’s frivolous. Throughout, writers Paul Brotherston and Isobel McArthur strongly evoke two contrasting emotions – the thrill of early electronic exploration and the frustration of pushing radical ideas through a resistant bureaucracy.

McArthur herself plays a convincing Oram, her formal style and manner cloaking the heart of a revolutionary. Through the clipped tones and buttoned down demeanour, she allows a peek at the human passion behind Oram’s tech geekery. Upstage, live sound artist Anneke Kampman acts as her musical spirit guide, broadcasting sine waves and noise bursts from a piece of kit that would have the real Oram salivating.

Inevitably, Wonderful World… hits a pitfall of biographies of highly talented but otherwise ordinary people – lack of drama. Oram’s work may have been extraordinary, but the narrative arc of her life wasn’t. Thus we get a sense of the times and the person, but little suspense or tension. The whole play would have had to centre on her battles with the Beeb to get those peaks and troughs.

We also get scant insight into Oram’s emotional connections to her colleagues. There’s little depth in her relationship with co-founder Desmond Briscoe, for instance.

Instead, the play goes long on her personal philosophy. “Life is a process of clarifying one’s own wave patterns,” she says, summarising her world view in a stand-out monologue. For Oram, who defiantly considered herself a composer rather than a boffin, electronic music was a prism through which you could glimpse the soul. She took the view that, far from being instruments of cold precision, electronics could embrace imperfection. A blip in a waveform or the involuntary spasm of a human operator were not flaws, but enhancements, and the true beauty of music, she believed, lay in active, participatory listening.

This detail in the theatrical portrait of Oram makes the show, and compensates for lack of drama. It’s a quality cast, an attentive production, and leaves the viewer with a vivid picture of this electronic pioneer.