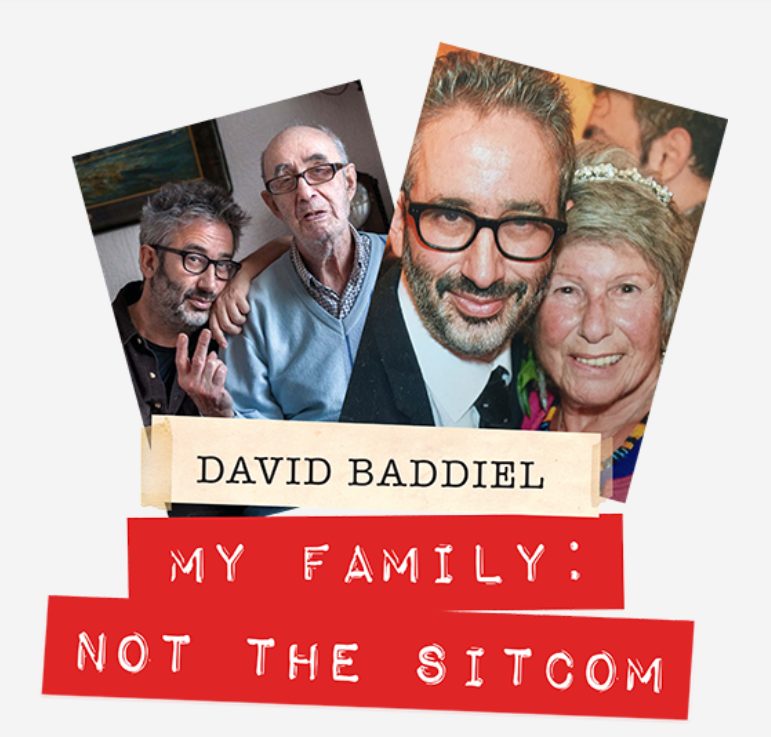 Standing in front of a backdrop of mock wallpaper and framed family photos, with all the burgundy fleur-de-lis charm of a 70s upbringing, David Baddiel kicks off his show not by talking about his nearest and dearest, but about the anonymous trolls and troglodytes of Twitter. Mining his own social media presence for laughs is a reliable (if a little undemanding) way of easing us into the show, but it feels like little more than the entrée before the feast. Sure enough, it’s not long before he’s whipped off the silver cover of the show’s platter to reveal a main meal consisting of his father’s dementia and his mother’s sexual deviance. Bon Appetit indeed.

With his mother having passed away several years ago and his father suffering from the rare, rambunctious condition of Pick’s disease, Baddiel has taken the old adage of laughter being the best medicine to heart and constructed a hilarious homage to both of his parents (though more to his mother). Subtitled My Family: Not the Sitcom, the show contains enough taboo subjects and boundary-smashing revelations to bury Wannamaker and Lindsay under an Everest of Ofcom complaints, had they featured in the series it references. Among other delights are his mother’s 20-year affair with a moustachioed golfing aficionado and the erotic poetry she penned for him, and the insidious effects this had on a mop-haired David growing up in their home.

It’s very much a show more concerned with his mother than his father, which Baddiel freely admits is due to the fact he feels he “owns” her story more than he does his dad’s (who is still alive). Perhaps more to the point, it seems as though his mother would have genuinely loved having the warts and all of her love life exposed to a paying public, being the irrepressible extrovert that she was. In any case, the show emphasises the unhealthiness of airbrushing out the quirks and imperfections in a person’s identity just because they’re no longer with us; doing so, Baddiel argues, is akin to effacing the very things that made them who they were altogether.

It’s hard to argue with him, especially when he’s so bloody hilarious about it. In the end, Baddiel’s homage to his mum is the kind of thing that perhaps all of us could create about our own parents – almost certainly without the same degree of salaciousness – and although not many of us would be as comfortable in trampling over the taboos as he is, maybe it’s more fool us. After all, the show is the embodiment of what a pub wake should be; remembering the departed with fond memories and touching tributes, but not without forgetting their lunacies and imbecilities. In this way, the tears of laughter might just make those of sadness sting that little bit less.