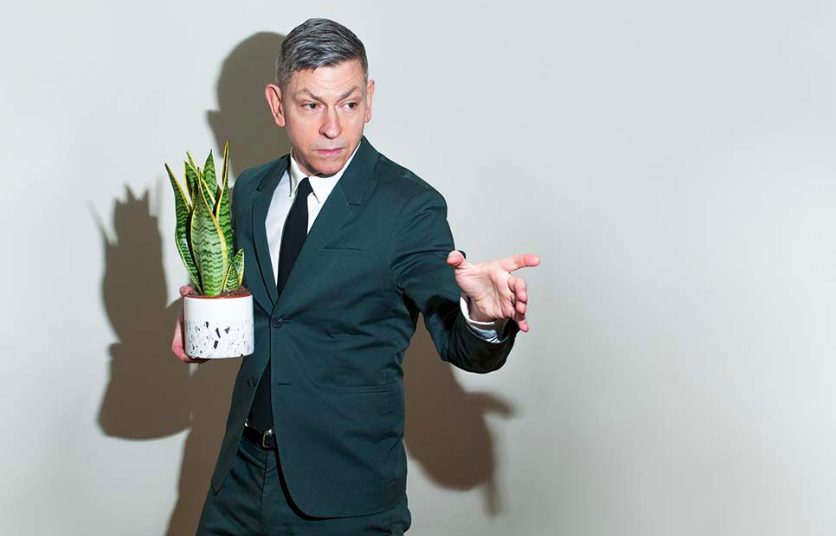 In his latest Fringe show Focus People! comedian David Mills provides social commentary as an American who has now become a Brit, employing his trademark incisive wit to amusing effect. Unfortunately, Mills’ show feels out of place in a mid-afternoon slot. He needs the audience to be less self-aware (i.e. maybe slightly more drunk) and his pithy style of comedy would be better suited to a riotous, night-time crowd.

Mills arrives on stage looking dapper in suit and tie, clutching a plant who is very much like him (a little prickly). He explains to the audience it’s an emotional support plant, who travels everywhere with him but doesn’t have a name because that would be be ridiculous! Focus People! begins with the stand-up mocking the number of theme weeks in his hometown – London Coffee Week, London Tapestry Week, London Tropical Fish Mental Health Awareness Week, the list goes on. He also thanks the audience for finding his show in an overcrowded festival programme, with seemingly dozens of festivals within festivals and even his show poster in competition for a prize.

Latecomers are seated at the front of the room and become immediate targets for Mills’ sardonic barbs, which is delightful to watch. He performs well-crafted riffs on the Royal wedding from an American/British perspective, Brexit, Trump, turning 50 and the confusion of non-binary pronouns. However, early in the show punchlines are failing to garner more than a mild chuckle and Mills tells the audience: “this show is going to go a lot better if we all agree I’m funny” which provides the biggest laugh of the hour.

Mills’ delivery is dripping in sarcasm and he ponders if after Brexit takes place the British will go back to our most iconic and innovative activities? Morris dancing, cheese rolling and arranging stones in a circle – there’s a whole anecdote about Stonehenge which is funny to start with but beaten to death by the end of the skit. What could be a pithy, bitchy hour of witty yarns instead turns out to be a mildly diverting hour of comedy with only hints at truly great material.