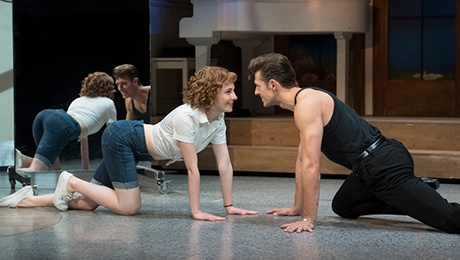 It may be corny but the dancing, music and chemistry more than make up for it.

Dirty Dancing is one of the most iconic dance movies of all time, instantly recognisable from its pulsating soundtrack. Its legions of fans know much of the film word for word and who hasn’t tried that lift at some point in their lives? But translation to stage can be a risky business for musical directors when films carry such a cult tag. Thankfully for the Dirty Dancing faithful, in this case, it works.

As soon as the curtain comes up and the music begins, the audience are transported back to the film and into Kellerman’s Resort, 1963, where middle class Americans have flocked for a simple summer holiday of organised games and lookalike competitions. But it is in the staff quarters, after hours, that the story, and the show, really hots up.

The entertainment staff have discovered a new dance movement and spend their time away from offering dance lessons to the summer residents perfecting new, exciting dance moves. This excitement and electric energy entices Frances “Baby” Houseman (Katie Eccles) and she soon falls for the star of the show, Johnny Castle (Lewis Griffiths). When Penny (Carlie Milner), Johnny’s original dance partner, falls pregnant, it is up to Baby to save the day.

The storyline is basic and the writing at times incredibly corny but this is entirely in keeping with the film which was low budget and surprised many by becoming a box office smash. It’s real success is in the dancing, the music and the chemistry between Baby and Johnny which Eccles and Griffiths nail. Griffiths, despite being an accomplished performer, need do little else than show his six-pack to earn applause from the predominantly female audience! It is Eccles’ hilarious efforts to learn the dance moves though that really draw the audience to the pair – it takes a talented dancer to pretend to be bad.

Milner oozes class as she merengues and cha-chas her way across the floor providing a real sense of glamour, and all the famous movie moments are captured, including the watermelon scene and the practicing of the lift in the water (this is almost cringeworthy but does raise a laugh from the expectant audience).

Baby finally gets her moment to shine in the finale as the fervour in the Playhouse reaches its peak, because, as everyone in the building knows: “Nobody puts Baby in the corner.”