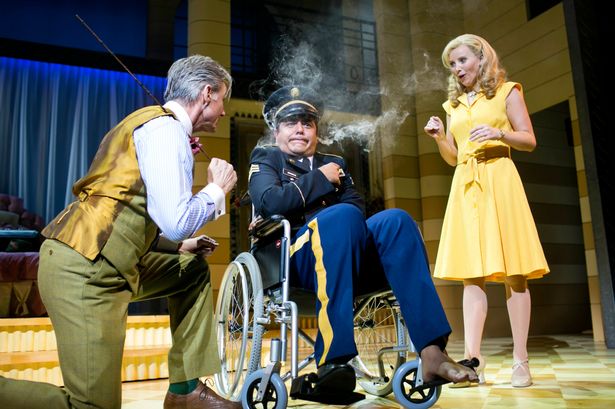 [Rating:4/5] A silly but charming musical adaptation of the under-rated '80s movie.

Perhaps not the most obvious choice for a musical adaptation, the 1989 caper comedy starring Michael Caine and Steve Martin has been taken for a makeover with David Yazbek at the helm of the music and lyrics. Following the exploits of two feuding, very different con artists, the feelgood film, whilst hardly earth-moving, was a pleasing enough farce that played well on the talents of its stars.

So arriving in Edinburgh this week at the Playhouse is the UK tour of the West End hit. Clearly relishing the role, Michael Praed takes on the Caine role as the high class playboy who cons older ladies out of their money, whilst Noel Sullivan is in the Martin role, as the less suave and more carefree con artist. Like the film, the show itself works well in the chemistry of its two leads: squabbling and constantly trying to outdo the other. Set in the French Riviera, the two men have got their sights set on the young and extremely rich Christine Colgate (played with wide-eyed wonder by Carley Stenson) and place a bet as to who can con her out of $50,000.

It’s screwball comedy at its best in this production, yet the goofy quality may very well cause as much eye rolling as belly laughing. The humour very much comes from the essence of the film and the comedy highlights (brother Ruprecht, Dr. Shuffhausen’s tests) are pretty much carbon copies of the film. Still, this nostalgia factor seems to be at the heart of the production. The set looks as classy as a Wham! music video and the whole production has a cocktail umbrella ’80s vibe about it.

Sadly Yazbek has a few misfires in the song line-up and there aren’t nearly as many memorable songs as you’d hope (Love is My Legs being the definite highlight for tongue-in-cheek humour). However, the cast of the production, including a strong ensemble, help lift the production. It remains faithful to the source material whilst having a cheeky, sassy attitude of its own thanks to the excellent chemistry of its cast.